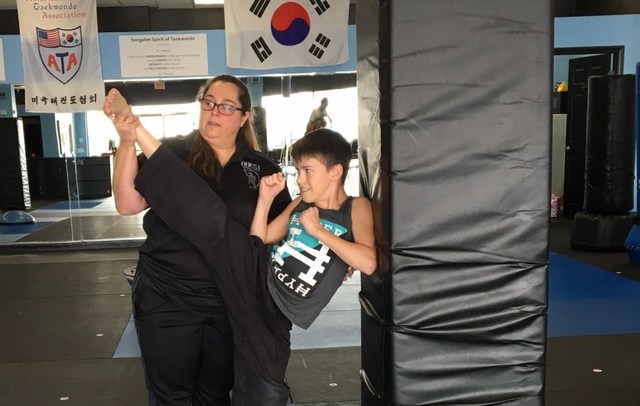 It was a competition for the best of the best and Ethan, 11, was waiting to hear whether this year he would take home first place in several events he was competing in.

The results were incredible. Not only did Ethan take first place, but he achieved a perfect score after his performance in XMA, or extreme martial arts, forms event.

"We were standing right there screaming, tears rolling down our faces," says Kim Bantum, one of Ethan's Taekwondo instructors.

And even though Ethan's achievement is impressive, his journey to world champion stands out as particularly difficult compared to others.

Talented from the Start

When Ethan was 3 years old, he was diagnosed with autism spectrum disorder—a disorder that can impair the ability to communicate and interact and comes with a wide series of signs and symptoms.

Although Ethan is high-functioning, meaning the signs and symptoms of autism spectrum disorder are less severe, he still had many challenges including hypersensitivity to touch and sound as well as difficulty interacting with other children.

So when Ethan was 7 years old, Mara sat him down and gave him three options: T-ball, soccer, or karate.

Mara hoped that by getting Ethan into sports, he would get more practice interacting with kids his own age as well as much needed exercise.

Ethan refused all three, so Mara made the decision for Ethan and drove him to a local Taekwondo studio.

It was a good decision.

Even from the very beginning, Ethan "just seemed to get it," Mara says. He began interacting with other children his age as they complimented him and look up to him. Soon after going, Ethan began having friends for the first time.

"It brings me to tears to watch him interact in a meaningful way with these kids," Mara says.

As he moved through the levels of difficulty to where he was almost a black belt, Ethan's coach approached Mara with a recommendation he wouldn't give to most students: Ethan should try a national competition.

Excited, Ethan and his family went to Las Vegas for the Spring Nationals American Taekwondo Association competition, where Ethan took first place in one of his events.

Seeing that Ethan could also win on a higher level, his coach recommended Ethan begin training to compete at the world championships.

Not long after that, Ethan met Kim Bantum, an American Taekwondo Association instructor and Latter-day Saint.

Bantum, a member of the Church, says she began coaching Ethan about two years ago when he was looking for more instruction.

"I saw the potential in Ethan a couple of years ago," Bantum says. "But because of his disability, there wasn't a lot of confidence. But I told his mother just trust me and trust what I'm doing and I promise it will happen. I mean, the kid is so talented it's easy to see."

And Bantum was right. Ethan is ranked among the top in the world in two martial arts leagues—the American Taekwondo Association and the National Blackbelt League.

Several times a year, Ethan and his family driving seven hours from Sandy, Utah, to Las Vegas to train with Bantum. When they aren't training together in person, they do Skype sessions, with Ethan practicing in an aerobics room at Mara's gym and Bantum watching and giving instructions.

"Everybody takes instruction differently, not everyone is the same," Bantum says. "I had to learn to pray about how I'm going to teach each of these children how to do it to the best of their ability."

And it looks like that effort has paid off.

But it does take effort on both parts. One challenge that Ethan and his instructors face is Ethan's tenancy to take things very literally. Once, during a particularly difficult move, Ethan was struggling to learn a coach jokingly said, "Ethan, you're killing me," Mara remembers. "He doesn't get those sort of things," she continues. "So his face turned mortified, thinking that his actions were now going to mortally wound his instructor."

"We have to make sure we explain it to him first the way we want it to come across," Tobin says. "If I tell him to hit harder, he doesn't understand because he's not hitting anything. So we have to explain to him the way to do before we actually tell him what we're going to say."

But even with the challenges he faces, Tobin says Ethan doesn't view his autism as a deterrent.

"A lot of kids would say, 'I can't do this because of this [autism],'" Tobin says. "But that doesn't stop Ethan. He's on the spectrum, but his work ethic and his determination are what separates him from the other kids. He already has a lot to battle, but he doesn't seem to let that stop him."

Bantum also agrees Ethan has an excellent work ethic, something he will hold onto as he trains for another world championship competition, this time for the National Blackbelt League, in December.

"I'm blown away by what he has endured and overcome as a human being as well as a martial artist to get to where he is," Mara says. "I couldn't be prouder."

Mormon Life AutismAutism,Mormon Life
Comments and feedback can be sent to feedback@ldsliving.com