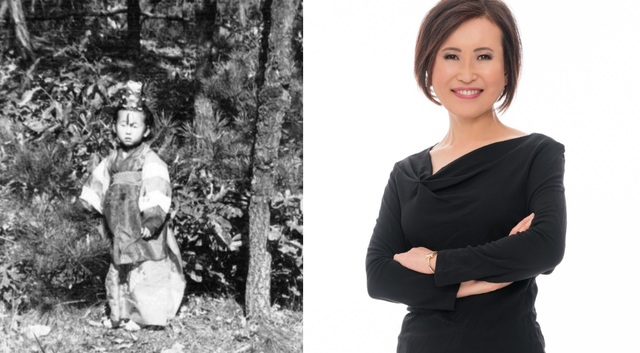 The barefoot five-year-old girl riding on her father's back tilted her head up at the expansive, black velvet sky that twinkled with bright stars. "Daddy, what's beyond Korea?" She inhaled the earthy scent of the surrounding farmland in dreamy wonder.

One arm curled under each leg, her father shifted her weight to reset his grip. "The ocean and many other countries on the other side of Earth."

"What's beyond the Universe?"

Her father stopped and replied tersely, “You are asking too many questions.” They resumed their walk in silence.

She asked three pivotal questions in her life, the answers to which shaped the direction of her life. This was the first question, which set the inquisitive child's mind ablaze with a profound yearning for truth. A hunger for knowledge that would set the stage for a life as brilliant as one of those shimmering in the night sky over rural Korea. That child was Sunnie (Hong) Giles.

Finding the Answers in the Church

One day after school, Sunnie was tending the farm alone. It was growing dark when she realized she still had a whole bucket of corn seeds yet to plant. She fell to her knees, sobbing. With face and hands raised skyward and tears streaking her cheeks, she pleaded to the unknown God, asking her second pivotal question. “God, do you exist? Are you there? It’s too hard for me. Please help me.”

Fast forward another few years. Sunnie was a confused teenager wandering the streets of Seoul, when she asked her third pivotal question to the unknown God, “What is the point of all this? What is the purpose of life?”

Soon thereafter, Sunnie met a couple of American Mormon missionaries who offered an English class. After hearing about the merciful Jesus Christ, she decided to be baptized. Throughout the day of her baptism, her cheeks flushed red with heart-pounding excitement.

Sunnie's conversion came a few years later as a freshman in college. She was taking a D&C class at the Institute. The teacher was explaining the three degrees of glory. During the discussion on Celestial glory, she saw a vision of magnificent light. At that moment, she received answers for the three pivotal questions she had asked earlier in her life.

During her prayer that night, she realized that Jesus Christ died for her personally. In her mind’s eye, she saw that when He was suffering under the weight of everyone’s sins, her name went across His mind. And He said, “Sunnie, I do this for you.” The realization made her insane with humility and gratitude. She knew then she would never be the same—that His love would change her forever. That was the defining moment of her life, and it made her truly lose desire for sin.

The barefoot farm girl from Korea, now infused with the grace of the Savior and the power of her convictions, bucked old-school Korean tradition not only by attending college but by attending in America even.

She came to Brigham Young University with $70 in her pocket and graduated with honors and a Bachelor's degree in accounting. Scholarships covered the tuition. She scrubbed toilets at 4 a.m. to cover her living expenses. She also served her mission in Oakland, California, during these undergraduate years.

As expected, her mom started yelling and hung up on her in anger when she told her of her decision to serve a mission. She wrote to her mom every week, sharing her missionary experience and testimony. But when she opened the first letter from home six months into her mission, her mom told her that she would disown her if she didn’t come home. She cried, prayed, and talked to her mission president. He left the decision up to her and God. She decided to stay and kept writing her mom.

Another few months went by and she got another letter from her mom telling Sunnie that her mom had kidney cancer and a month to live; she asked her to come home. Again, Sunnie cried, prayed, and decided to stay, not knowing if her mom was going to live or die.

A couple months later, she got transferred to her last area. After a baptism, one young man came running towards her in the cultural hall and said, “Sister Hong, I think I know you!” She couldn’t recall. A couple of minutes later, he came back to her and told her the most unforgettable story of her life. It turns out that he had just returned home from his mission in Korea. One day, he and his companion were riding the subway. An older lady standing next to them pulled out a picture from her purse and told them, “My daughter is doing the same thing you’re doing, only she is doing it in Oakland, America.” It was a picture of her and her companion with the Oakland temple in the background. He said, “Your mom was so proud of you! She had the biggest smile in the world!”

She plopped down on the cold cultural hall floor and sobbed. Of the billions of people on earth, God took the time to let her know that He was mindful of her struggles and that she was doing the right thing by staying on her mission. This testimony has carried her through all the trials, despairs, and struggles of life because she knew He knew, cared about, and loved her.

After her MBA from the University of Chicago and several years as a business strategy consultant and corporate marketing executive, Sunnie returned to BYU for a Ph.D. In 2018, Sunnie published her first business book, The New Science of Radical Innovation: the Six Competencies Leaders Need to Win in a Complex World.

She gives full credit to Heavenly Father and strives every day to bring light to the corporate world she serves as a global expert on innovation and leadership.

Her words of encouragement to those who find themselves in difficult circumstances, "Dream big. Work hard. Get an education. Never give up. Most importantly, develop a strong testimony and a personal relationship with the Savior." This story is hers.

Dr. Sunnie Giles is the founder and president of Quantum Leadership Group and author of The New Science of Radical Innovation. She helps organizations catalyze radical innovation with her consulting, training and coaching program. She is a TEDx speaker on radical innovation and her global leadership research was published on Harvard Business Review. She is a regular Forbes contributor and will be speaking on radical innovation at the prestigious Global Peter Drucker Forum in Vienna, Austria in November 2018. She is a member of Highland South Stake in Utah.