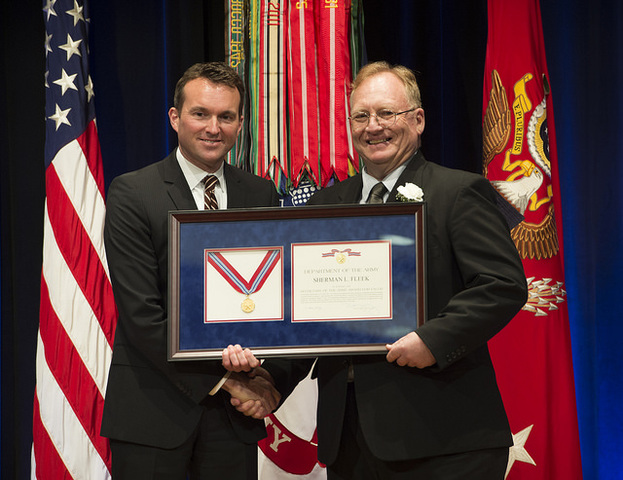 “Of course I am deeply honored, and no, I do not consider myself a hero,” Sherman Fleek says after winning the Secretary of the Army Award for Valor. "I just acted. I didn’t even think it through. Why all the fuss?"

On May 25, retired Lt. Col. Sherman Fleek, now serving as the civilian command historian at the U.S. Military Academy, was awarded the Secretary of the Army Award for Valor by Secretary Eric K. Fanning.

According to the Army, nominees distinguish themselves by exhibiting “great courage or sacrifice involving heroism or bravery.”

And sometimes, they do it while waiting for pancakes.

On May 31, 2015, Fleek, also an author of both historical fiction and nonfiction, was on leave from West Point to attend his son’s marriage in the Sacramento California Temple. He took the opportunity to visit the 93-year-old widow of a friend in Fairfield, California. Shortly after noon, Fleek and his friend visited a local IHOP.

As he sat in the lobby, Fleek had no idea he would call on years of military training as they simply awaited an open table.

“I heard some loud voices, calls and crying,” Fleek said. “Then two young women ran from their chairs past me in the waiting area and dashed through the doors.”