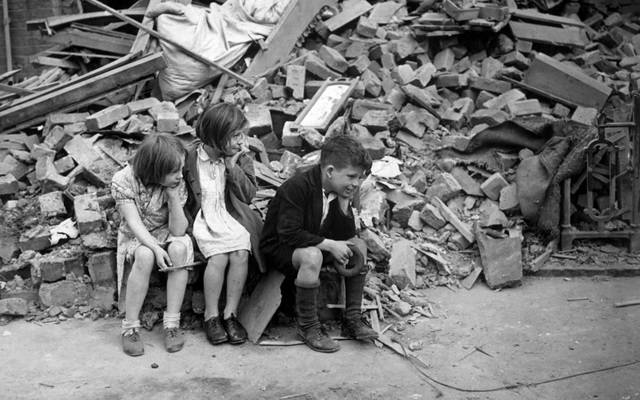 How a Prayer Saved One LDS Family from Death During WWII

The following is an excerpt from President James E. Faust's April 2002 general conference talk, "The Lifeline of Prayer" during which he quotes from Elder Andre K. Anastasiou's October 1946 general conference address. We are grateful to Meridian Magazine for making us aware of this story. To read selections of the 1946 talk, you can read it on their site here.

Family prayer is a powerful and sustaining influence. During the dark days of World War II, a 500-pound bomb fell outside the little home of Brother Patey, a young father in Liverpool, England, but the bomb did not go off. His wife had died, so he was rearing his five children alone. He gathered them together at this very anxious time for family prayer. They “all prayed . . . earnestly and when they had finished praying, the children said: ‘Daddy, we will be all right. We will be all right in our home tonight.’

“And so they went to bed, imagine, with that terrific bomb lying just outside the door half submerged in the ground. If it had gone off it would have destroyed probably forty or fifty houses and killed two or three hundred people. . . .

“The next morning the . . . whole neighborhood was removed for forty-eight hours and the bomb was finally taken away. . . .

“On the way back Brother Patey asked the foreman of the A. R. P. Squad: ‘Well, what did you find?’

“‘Mr. Patey, we got at the bomb outside of your door and found it ready to explode at any moment. There was nothing wrong with it. We are puzzled why it did not go off.’” Miraculous things happen when families pray together.