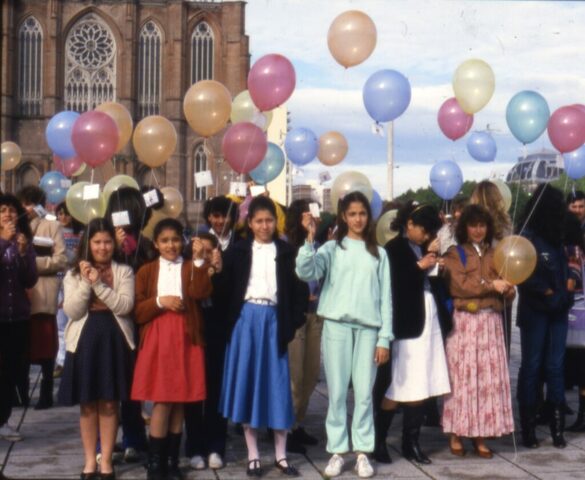 It’s been 150 years since the founding of the Young Women organization. On May 25, 1870, President Brigham Young gathered his daughters in the Lion House in Salt Lake City, asking them to set an example to other young ladies and help reduce extravagance and bring about greater economic unity in the community. Two days later, on May 27, the Young Ladies’ Department of the Ladies' Cooperative Retrenchment Association was founded.

► You may also like: Celebrate the 150th Anniversary of the Young Women Organization with the General Presidency

Church News editor Sarah Jane Weaver reflects on a moment in the organization's history when Sister Ardeth Kapp was Young Women General President. By invitation from President Kapp and her counselors, Young Women all around the world recorded their testimony on a piece of paper, attached it to a balloon, and released it into the sky.

“The moment my balloon floated away 34 years ago is seared in my memory. I was filled with the knowledge that I was a part of something bigger than myself, something that mattered—a lot,” wrote Weaver.

Although no one found the message that Weaver attached to the balloon, she later had the opportunity to talk with Sister Kapp about her fond memories of the experience. Weaver had no children at the time, but Sister Kapp—who was never able to have children of her own—promised Weaver that her “daughters would one day deliver [her] message to the world as missionaries for the Church of Jesus Christ.”

One of Weaver’s daughters is now a returned missionary, while another daughter is preparing to serve a mission in the fall.