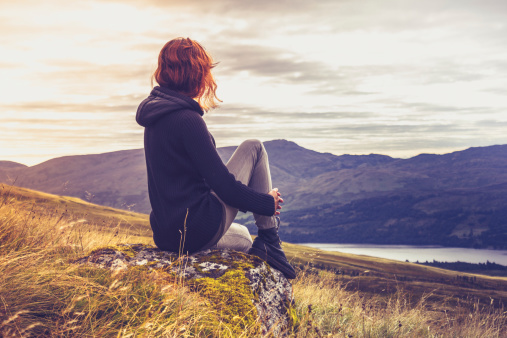 It was my junior year and my seminary teacher was teaching us about ways we receive promptings. To illustrate, he mentioned one time he was prompted to find a case of hot sauce in a grocery store.

"I couldn't find it anywhere, but then I had an impression to look underneath a shelf," he said.

This didn't make any sense to him because it was just hot sauce after all and it wasn't really important to his spiritual or physical well-being.

I didn't realize it then, but this lesson could not have come at a better time.

That year, I began planning out where to go to college. I wasn't really sure what I was going to do once I graduated high school other than I wanted to finish up my associate degree at a community college where I had a full-tuition scholarship and then transfer to an in-state university.

But I did know two things: there was no way I was going north and I wasn't going to take another math class. Math and cold weather just are not high on my favorite things list. Plus I knew if I stayed close to home, I could find affordable housing and have two or three universities to choose from.

So my senior year, I applied to a few universities but nothing seemed right. And as I looked at majors I thought would be good for me, none of them felt right either. I took the lesson about the hot sauce to heart and began fasting and praying about what university I should attend and what major I should choose and then waited for a prompting.

One day, out of the blue, I decided to go to the website of the one university I had ruled out as a no-go my sophomore year. It was by far the northernmost university in my state, and there was just no way I was going to suffer there in the cold for four years. But as I looked at the home page, I felt a definite but not earth-shattering prompting that was where I needed to go and that I needed to major in engineering.

1. I laughed. Me, in engineering? I could barely pass my concurrent enrollment math classes and I hadn't even made it to calculus yet. What good would I be as an engineer?

2. I panicked. There was no way this could be a real prompting. What was I even thinking? This school was known for sub-zero temperatures and tough engineering programs. My GPA would be tanked within three weeks of the first semester. Why would God want to send me there?

So I talked myself out of the prompting and applied for the university almost as far south as I could go in my state.

No acceptance letter. No scholarship offers. Nothing.

Finally, after months of fasting, praying, and even a priesthood blessing, I knew what I had to do.

I enrolled in the last university I would ever want to go to as an engineering student.

My family told me it would be a waste of money, that it didn't make sense for me to major in engineering or move to this university, but I did it anyway because I knew it was what I had to do.

And it went about as horrible as I thought.

I flat out failed my math class and barely passed my other classes. And this was after spending about 40 hours each week studying, going to tutors, and working on homework.

Oh and that winter, it hit negative 21 degrees.

When I came home for Christmas break, my family saw my sorry state and tried to persuade me to just switch majors or come home for a semester.

But the words I had received from my priesthood blessing kept coming into my mind and I knew that I had to go back and stay in my major.

The next semester, I hoped I would be able to understand the material better, that I would be blessed for my efforts and receive better grades.

And while I was blessed with great roommates and friends who encouraged me to do my best, my grades stayed about the same. And I became a little bitter about it.

Didn't Heavenly Father want me to succeed? What was the point of feeling like a failure all the time if it didn't do me or anyone around me any good?

So when my home teachers offered if they could help us with anything before they left, I flippantly mentioned one of the classes I struggled with the most.

A little embarrassed I hadn't noticed him in the class before, I asked him if he could help me with a homework problem I was struggling with.

He did. And the next class period, he saved me a seat.

Now, let me be absolutely clear: I did not major in engineering to find a boyfriend. In fact, I was adamantly against the thought of it and told everyone I knew just what I thought about girls who did that. There are just easier, less expensive ways to meet guys.

But that's what happened. My home teacher and I started dating, the irony of which wasn't lost on me.

And to my eternal relief, at the end of the semester, I felt a strong prompting that it was time for me to switch majors.

At the time, the prompting I had to major in engineering made absolutely no sense. I was letting go of everything I had planned for myself, spending large amounts of my own money on housing and tuition, and I was gambling with my future on one prompting.

But now I know that Heavenly Father had something way better in store for me than I had planned. He knew I would struggle to make ends meet. He knew I would feel like a failure. And He knew it wouldn't make sense to me at the time why I was going through all this.

But He also knew this was the best way for me to get to know the guy I would later marry.

And when I look back, whatever I felt I was sacrificing was made up to me a hundred times over.

So while I know there will be bigger and even scarier things I'll have to face, I also know Heavenly Father knows what He is doing. And following His promptings will ultimately lead to greater happiness and joy, even if the prompting doesn't make sense at first.

Sometimes it seems impossible to find answers for life's important decisions. Even after praying, it can be difficult to discern the Spirit's voice from the other voices around us. Using his own special insights and his experience as a psychotherapist, Kevin Hinckley in his book Prompting or Me? helps you answer the question we've all asked at one time or another: Is it a prompting, or is it just me?