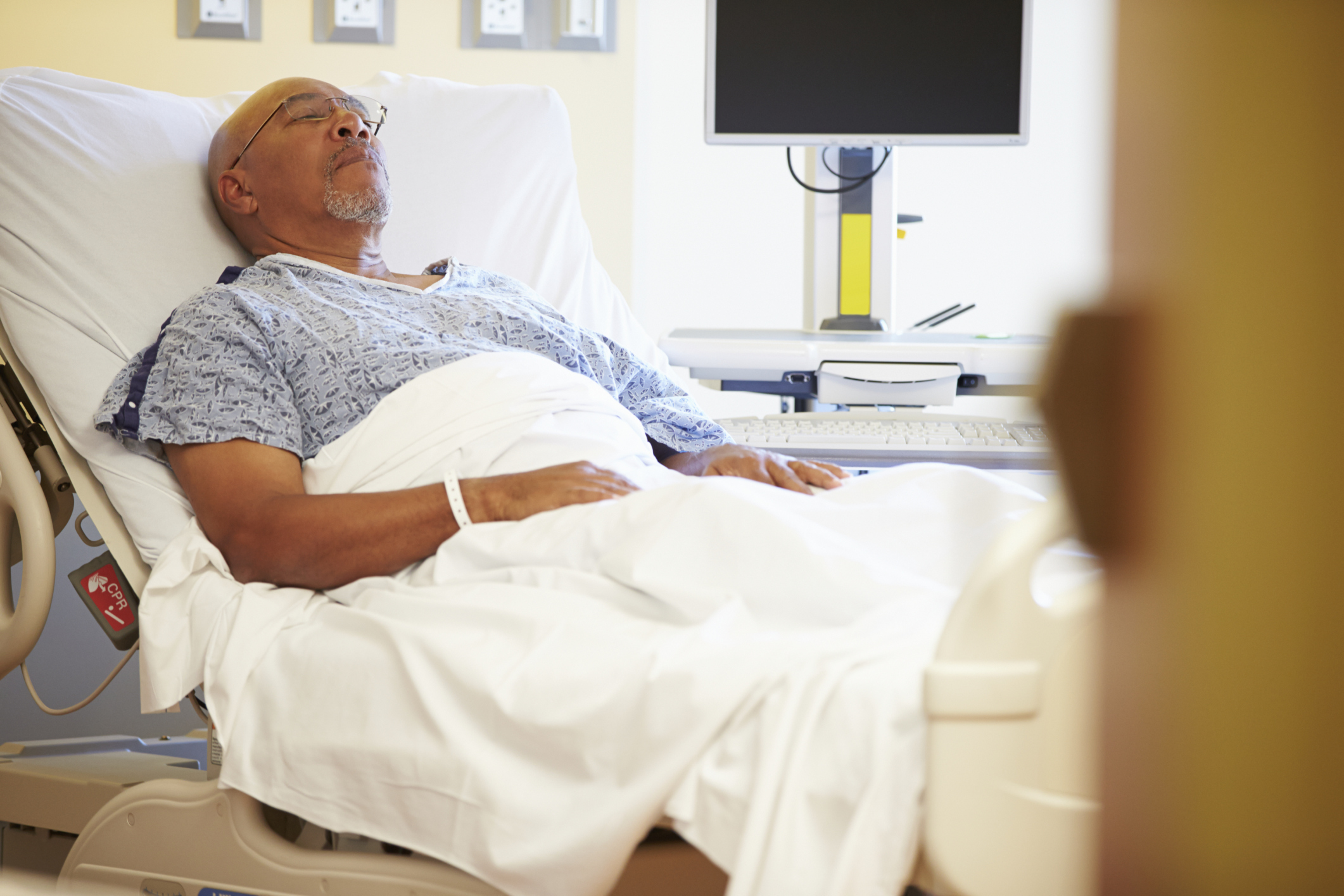 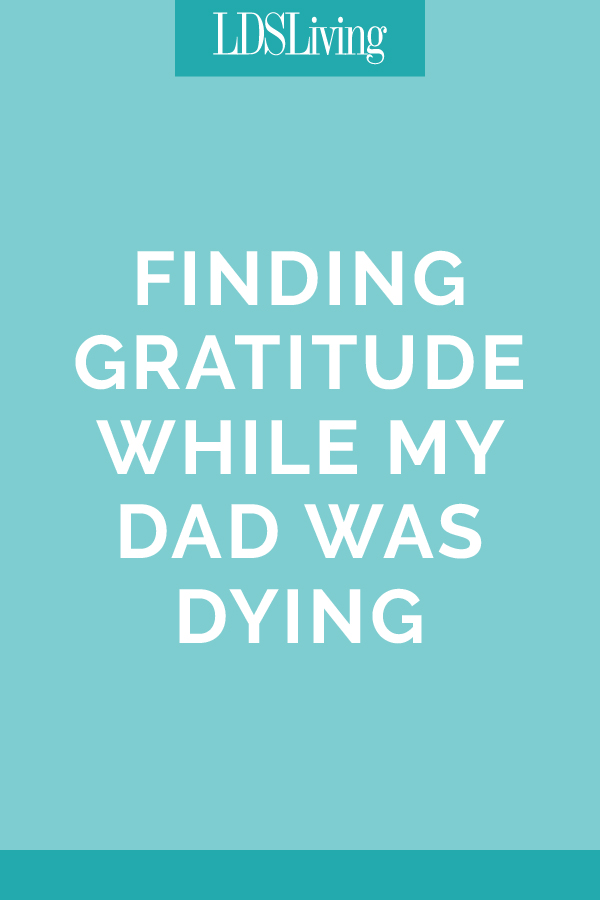 It was early on a Sunday morning in January and the fifth-floor cancer wing of the East Texas Medical Center was uncharacteristically quiet.

I had spent the night on the couch in my father’s hospital room, and before rising, I peeked through the curtains just above my makeshift bed and out into a winter wonderland—the trees and grounds glowing with freshly fallen snow. The peaceful scene before me contrasted sharply with the anxiety I felt over my father’s rapidly deteriorating condition.

I crawled from beneath the covers, slipped my shoes on, and tiptoed across the floor so as not to disturb my younger sister who was somehow sleeping soundly in the recliner beside the couch.

I settled into a chair beside my father’s bed, and while watching my big teddy bear of a father sleep, I thought about how he had never missed a Sunday of church until the last couple of weeks when he was too sick and weak to attend.

When he awoke sometime later and focused his eyes on me, I asked if it would be okay if we had our own Sabbath day devotional. Although he had spoken very little in days due to the increasing pressure of the tumor on his brain, he managed to mouth the word “OK” in something just above a whisper.

The first place I turned for inspiration was to his favorite section of the Doctrine and Covenants, to the very verse he had raised his four daughters on. I read aloud in a tone I hoped conveyed my love and respect for the man who had woven the power of this verse into the fabric of my spirit: “Therefore, fear not, little flock; do good; let earth and hell combine against you for if ye are built upon my rock, they cannot prevail" (Doctrine and Covenants 6:34).

My father smiled and nodded his appreciation but gave no verbal response. I then pulled from my backpack a copy of the most recent general conference issue of the Ensign and thumbed through the pages, trying to decide which talk to share.

I looked from the table of contents to my father, tears forming and threatening to overtake the big-girl face I was trying so hard to put on. I simply could not comprehend that the man who lay in front of me, significantly paralyzed now, and barely able to speak, was the same man who had, only weeks earlier, been arguing cases in the courtroom.

After a time, I managed to speak, “Dad, I’m having a hard time figuring out which conference talk to share.”

Saying this was my way of buying another minute or two of blinking away the tears so I could see to select a talk. However, in the next moment, my father surprised me by speaking aloud — “Why don’t you read ‘The Divine Gift of Gratitude’ by (President) Thomas S. Monson?”

I couldn’t believe what I had just heard. The few words my father had spoken in recent days suggested that his thoughts were becoming muddled, or at least his ability to express them. But what he shared now was clear-minded and inspired, said only with tremendous effort.

I looked at my father lying in the hospital bed—weak and immobile—and said, “Okay, Dad, okay, I’ll read the talk on having gratitude,” and I did.

As I read through paragraph after paragraph, one passage in particular leaped out at me as if President Monson had written it just for us in this very hour of our need:

“When we encounter challenges and problems in our lives, it is often difficult for us to focus on our blessings. However, if we reach deep enough and look hard enough, we will be able to feel and recognize just how much we have been given.”

By the time I finished the talk, my father was asleep again. We were definitely in the midst of difficult times, and, I confess, I was not especially focused on all that I had to be grateful for. Rather, my thoughts had been consumed with heartache for my father’s suffering and a tremendous sense of dread at the probability that he would soon no longer be in this world, a world that I had only ever known with him in it.

Recognizing that I was on what felt like a sinking ship of heartache and grief and needed some relief, I took to heart the prophet’s reminder to focus on our blessings even in the midst of challenging times. If my father, who was so beaten down by a terrible disease, could with the few words he was able to speak, remind me to focus on my blessings, I owed it to him to dig deep and look hard to better recognize and feel just how much I have been given.

As I made a point of focusing on what I have to be grateful for, my list quickly grew.

The more I focused on what I had to be grateful for, the more I realized how much I had been given.

It was several weeks later when my father passed on, and even with my faith and gratitude, it has been hard. In part, because our family had been hit hard with multiple losses in the last two years—my beloved mother-in-law and father-in-law, a very dear friend, an uncle, and an aunt.

Out of necessity, I allowed myself space to grieve, but in the midst of that grief, I remind myself to dig deep and look hard to be mindful of all that I have been given. And while focusing on what I have to be grateful for doesn’t take all the hurt away, it dilutes my heartache, strengthens me, and helps me to smile through my tears.

So, this Thanksgiving, as we pause to give thanks for all that is ours, I include that precious Sunday morning at my father’s bedside when I learned in a way I will never forget, that no matter our circumstances, whether we are in happy times or sad, the divine gift of gratitude is always available to us.

Debra Sansing Woods is a mother, freelance writer, and book author, including the acclaimed parenting book Mothering with Spiritual Power. Her writings often focus on and celebrate home and family life.You can visit her at debrawoods.com.

Makes You Think Gratitude Holidays Christmas Lifestyle BlessingsGratitude,Holidays,Christmas,Lifestyle,Blessings,Makes You Think
Comments and feedback can be sent to feedback@ldsliving.com