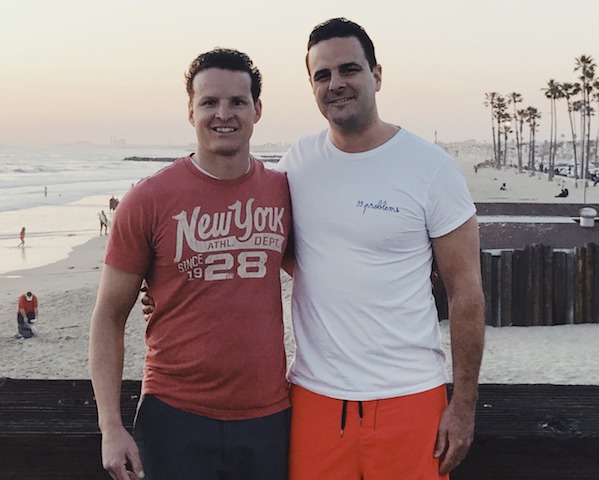 Sitting in the Newport Beach California Temple on a Friday afternoon, Neil Stokoe was completely enveloped in the Spirit.

"I just felt that [the Spirit] so strongly and it took me back. It took me by surprise because I always have a spiritual experience when I go there [to the temple], but this was different, and I just felt myself tearing up," Neil says on the Mint Arrow podcast "Triumph Over Tragedy: The Story of Dave's Death and Choosing Light Over Darkness."

Meanwhile, Neil's wife, Corrine Stokoe, kept getting the same prompting over and over again.

"It's interesting because when we go [to the temple], we always try to ask each other, 'Did you get anything? Did you feel any personal revelation? And did God speak to you?'" Corrine says in the podcast. "And the only thing that I felt that day was . . . 'Don't rush him.'"

Neither of them knew, or could possibly know, how this incredibly sacred experience in the temple would strengthen them for the news that was to come.

On Thursday, January 17, Neil's brother Dave Stokoe was reported missing. The 40-year-old real estate agent from South Jordan, Utah, and had gone to visit an upstairs apartment where his tenants lived, according to the Deseret News.

On Friday, January 18, Dave's body was found in a crawl space inside a closet in the apartment. Dave had been shot four times, and the tenants who lived in the apartment were arrested.

However, when Neil and Corrine came back from the temple, they still didn't know anything had happened.

But while Neil was in the temple, a friend of Dave had called and left a voicemail. Neil called his friend back and "shot the breeze" until Dave's friend said the words: "What do you know?"

Around the same time, Corrine received a screenshot from her friend of a Salt Lake City Police Department tweet. It was a picture of Dave. It read, "Dave Stokoe missing."

In a flurry of phone calls, Neil and Corrine learned that Dave had been missing for a day and no one knew what had happened.

During this time, Neil says he had a sense of peace and this brother was fine.

"And so I'm like, 'Okay, this is probably just a big misunderstanding,'" Neil says. "'He's probably fine.' And I thought that until I saw a Facebook Live a news station in Utah was doing at the scene in front of the house that he had gone to. . . . And you could see in the background everything was taped off with crime-scene yellow tape."

It was then that it started to set in that something bigger was happening.

After talking with Dave's wife, Neil and Corrine made plans to fly from their home in California to Utah to be with Dave's family.

At around 10 p.m., Neil and Corrine put their children to bed. Dave was packing for the trip to Salt Lake. Then his phone rang. It was Dave's wife.

Click on the link below to listen to the full podcast and hear how Neil and Corrine found peace in Heaven Father's plan of salvation during this tragedy.