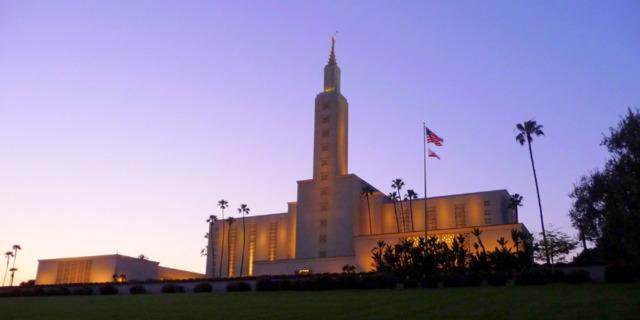 On September 22, 1951, President David O. McKay broke ground for the Los Angeles California Temple, which would become the 10th temple of The Church of Jesus Christ of Latter-day Saints.

And in February 1952, President McKay encouraged members to help with the cost of building the temple and challenged the Saints to raise $1 million for its construction, according to Temples of the New Millennium.

That call was answered in part by fashion designer Rose Marie Reid. At the time, she was one of the most famous fashion designers in the world. According to Deseret News, after making a personal donation, Reid came up with the idea to design a new swimsuit and recruit Relief Society sisters to sew sequins on each suit by hand. The women could then donate their wages to the temple fund.

Just three months after President McKay’s call, the Saints had raised over $1.6 million for the temple fund.

► You may also like: Looking back at the remarkable impact of Latter-day Saint women since the Restoration

The “temple swimsuit” is one of 50 items spotlighted in a new book by Casey Paul Griffiths and Mary Jane Woodger, 50 Relics of the Restoration. Other items highlighted in the book include things like a brown seer stone and Lucy Mack Smith’s 1830 Book of Mormon.

“The objects in the book are interesting because of the events they were involved with. The power to cause miracles comes from God and not from a particular object, no matter how special it is,” Griffiths told Deseret News. “But objects like the ones featured in the book can provide a new perspective on some well-known historical events.”

See pictures of 11 of the items in the book, including the “temple swimsuit” at Deseret News. The book 50 Relics of the Restoration is available now at DeseretBook.com.

50 Relics of the Restoration highlights the history of the Church through sacred objects gathered throughout its history. Included with the objects are some of the most vivid and interesting stories of the Latter-day Saints, which allow those who read them to interact with their beloved forbearers and become a part of their history.