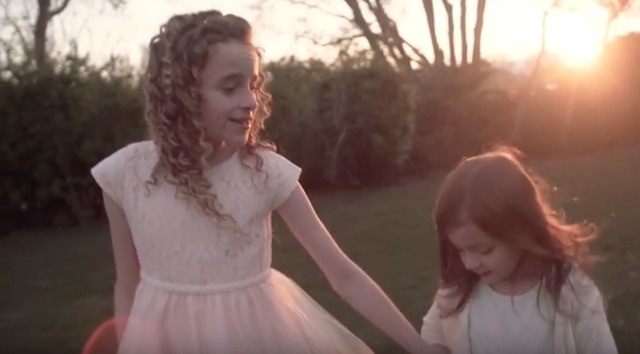 When 11-year-old Reese Oliveira's mom, Suzy Oliveira, first heard "I Know That My Savior Loves Me," she says she was deeply moved and knew that she and her daughter had to make a music video of the song.

Though she reached out to the songwriter, Tami Creamer, in 2016 for permission to use the song, she says she hesitated to create the video due to lack of funding and the time involved to create a music video of this magnitude.

But a few weeks ago, Suzy says she experienced "many, many promptings to bring this video to life" and began the project in earnest, with everyone pitching in to raise funds, find locations for the video, or select a wardrobe for the participants.

Within a week, Suzy says the director of the One Voice Children’s Choir had arranged the song and taught the harmonies "on the spot" in the recording studio. "It was marvelous to see his inspiration at work, and to see the children follow along," she says.

However, with a short window of filming time, disaster nearly struck when a snow storm came two days before the video's April 10th shooting date.

"I asked everyone involved in the video to please pray for sunshine," she says, and fortunately, "the heavens were opened and it was a glorious, beautiful day."

She adds, "I hope this song and video will touch your heart. There have been times in my life where I have felt lost, confused, and scared. When I hear this song, my heart feels hope, [the] hope of our Savior and all of His promises."

Mormon Life Inspiration SaviorInspiration,Savior,Mormon Life
Comments and feedback can be sent to feedback@ldsliving.com