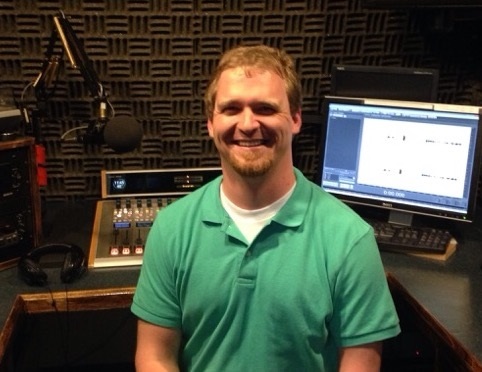 How One Man Overcame Severe Brain Damage to Serve a Mission, Live His Dreams

Your son may never sit up.

Your son may never walk.

Your son may never feed himself.

That is what doctors told Melanie and David Herrmann when they found their premature son Nick's brain was bleeding.

As a young mother, the experience was horrifying, she says.

Each day, Melanie watched and prayed to see if her two and a half pound baby's condition would improve from a vegetative state.

Though the odds of Nick ever living a normal life seemed insurmountable, Melanie and her family refused to give up hope.

After a few months, doctors were surprised to find Nick's eyes tracking movement instead of staring blankly.

But Nick's improvement did not end there.

As time went on, Nick continued to surpass daunting adversity through faith, effort, and the help of those around him.

From the very start, Nick had to work harder than most people to process information. Due to damage from bleeding, he has cerebral palsy on one side of his body. He also has a nonverbal learning disability that makes it difficult to understand nonverbal cues like facial expressions and body language.

"It did get to the point where babies around us that were the same age were doing things that he wasn't doing," Melanie said. "It was clear that yes, we were going to have some challenges."

But there were also things Nick seemed to be a natural at. He began reading when he was three years old. He won his school's spelling bee in first grade. He knew "Jeopardy" answers and he memorized practically anything, including movie lines he would rehearse to his family.

By working with a few neuroplasty techniques or ways of rewiring brain function, Nick was able to steadily improve.

"Dallin Oaks said in a conference talk, I think it was 2010, that we do all that we can to help our situation, and then we ask God to consecrate our efforts for our gain, and that's kind of been the story of Nick's life," Melanie said.

Upon graduating from high school with a 3.4 GPA, Nick set his sights on a mission.

I Hope They Call Me on a Mission

After turning his papers in, he waited two weeks, then a month, then two months.

At three months, Nick said he was beginning to feel like maybe he wasn't going to go. Then a phone call from his stake president came.

"Nick I need you to come in and talk to me, and bring your parents," he said.  Nick says, "That's when the guillotine dropped, and my heart just went into my stomach."

It was a letter to excuse Nick from a full-time mission.

His mom cried. His dad walked out of the office half-way through reading the letter. Nick was, "extremely shocked, extremely angry."

The stake president gave Nick two options: serve a church mission in Salt Lake City, or he could write a letter to Church offices and put his mission papers in again.

He went home, tore off his tie, and bawled.

"He was like, 'Have you had enough time to think about it?'" Nick says.

Remembering his patriarchal blessing that promised he would serve a mission, Nick said it was either a full-time mission or nothing.

His stake president sent a letter. About a month later Nick was called to the Tallahassee, Florida mission.

Nick served for about a year before he tore his Anterior Cruciate Ligament or ACL, a ligament that helps stabilize the knee, and had to come home for surgery. Nick said he remembers laying on his couch, his leg elevated and in a cast, reading Preach My Gospel and practicing missionary lessons on family members.

When he recovered and was ready to return to his mission, he received a letter from mission headquarters with a concern that his ACL, which had been torn before, would cause serious health problems on his mission. Because of this, the letter also told Nick he could be released from his mission.

"I just remember the feeling of sadness, because I wanted to go back out, but at the same time a feeling of relief in knowing I had done what I had meant to do," he says.

Moving on to College Life

From his mission, Nick jumped straight into college as a communications major.

His choice in major came from years of watching the back and forth banter of sports newscasters on TV broadcasting in front of millions.

"At a really young age, I would sit in front of the TV at 10 o'clock at night when I was supposed to be in bed to watch the late-night news for a half hour and just be like, 'That's something I want to do,'" he says.

But college, never an easy venture, was difficult for Nick. Though Nick's college offered him an "easy road out," with no upper-division classes, Nick declined.

Lectures often left him mentally exhausted because he would have to work harder than his classmates to process the information, but he didn't take a break when classes were over. Melanie says Nick would refuse to relax until all of his homework was completed, turning in projects two weeks in advance sometimes.

After working double-time, Nick graduated from Utah State University with a bachelor's degree in communications and a minor in entrepreneurship.

He also co-hosts podcasts on a YouTube channel called Brain Change 4 You to help others learn about neuroplasty interventions or ways of rewiring the brain.

For now, Nick is trying to get a grant that would allow him to continue working at UPR in Logan, Utah, but one day, Nick says he hopes to be able to take his podcasts to a deeper level.

Nick says he wants to create "Hope Radio with Nick Herrmann," a radio channel where he would interview famous neuroplasticians, specialists who work with rewiring brain function, and direct conversations about changing the way a brain works.

But Nick says he still takes things day by day, relying on his LDS faith daily to help him overcome challenges.

A "miracle boy" as Melanie calls him, Nick continues what he started as a baby: overcoming challenges and pushing himself to improve.

"I'm a better person than what they say I can be," Nick says, "Despite my brain injury and the struggles that come with it, I just try to live a normal life."

Mormon Life AdversityAdversity,Mormon Life
Comments and feedback can be sent to feedback@ldsliving.com