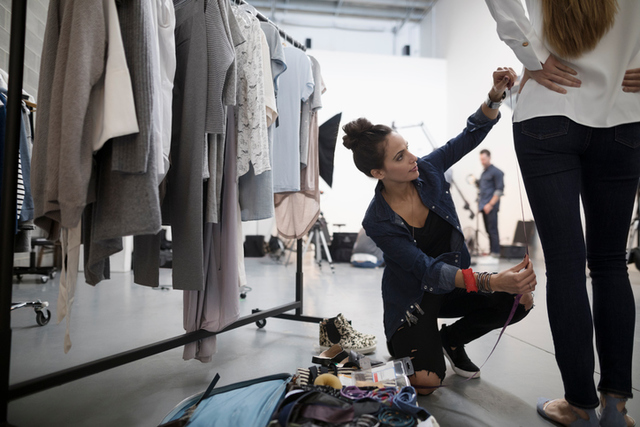 How an Unusual Prompting Protected Me from Being Drugged

The following is an excerpt from the Rosemary Card's new book Model Mormon. To read more, you can order Model Mormon here.

Brand-new models are called “New Faces,” and when you’re a New Face, nobody knows (read: cares) who you are. You spend a lot of your time running around Manhattan in sneakers and changing into high heels in glossy lobbies before meeting industry influencers like magazine editors, photographers, and casting directors. Your job is to put your best stiletto forward and hope they like you more than the ten plus other waiflike teens they met that morning and invite you to their casting calls. When you’re not running between go-sees, you do test shoots. Test shoots are basically collaborations between models, photographers, makeup artists, and designers who are trying to build their portfolios.

On one of my first Sundays in the city, my agents booked me for a test shoot early in the morning. My agents were really good people, and they knew I didn’t want to work on Sundays, but they understandably pushed most of the boundaries to see if I would bend some of the rules once I was out of my parents’ supervision. More than once they requested that I “put Mormon Rosie on the back burner for just a couple of months.” They understandably wanted a little bit of time with a little more freedom to get me jobs with more artistic photographers. “Once you make a name for yourself by shooting with some of the top photographers and designers, you can set your hard boundaries and everyone will have to respect them.”

Artistic in the industry is often code for “edgy,” and artistic photographers don’t like models who set boundaries or limits on their creativity. When you’re a model, you’re more of a prop in someone’s creative vision than a human with feelings and rights.

I sat on a cold orange subway seat and unfolded the piece of paper that my agency had given me with the shoot details. “Call the photographer when you get to X stop. He’ll meet you there and walk you to his apartment.” His apartment? Meeting some random photographer for a shoot in his Brooklyn apartment felt a little shady, but who was I to question them? I naively trusted that I would be totally safe on any shoot my agency booked. Would they knowingly put me in harm’s way? Absolutely not. But they also didn’t see themselves as my guardians in any shape or form. Hence why no one batted an eye at sending a 16-year-old girl to shoot alone with a male photographer in his apartment.

I finally arrived at the proper stop 15 minutes late thanks to MTA weekend construction. I called the photographer to let him know I was there and then waited alone on a chilly Brooklyn corner. Soon, a man in his 20s wearing ripped black skinny jeans and a puffy coat approached and introduced himself as the photographer. We made small talk as we weaved through the side streets of Brooklyn toward his “studio.”

I never hid that I was a Mormon from people I worked with, but I sure as heck didn’t lead with it. “I’m a Mormon” wasn’t exactly a catchy marketing phrase in 2005, and I didn’t feel like it was necessary or normal to bring up one’s religious affiliation within the first 15 minutes of a business interaction. I could still hear the screech of trains coming and going from the station when I felt the distinct impression to tell the photographer that I was a Mormon. With every stride toward his apartment, the impression lingered. I don’t remember what he was talking about at that point, but I do know it made absolutely zero sense when I responded with, “Oh cool. Yeah, so I’m a Mormon.” The young photographer was a little caught off guard, but he politely responded with a nod and continued with what he was saying.

When we arrived at his apartment, it was exactly what you would expect of a young creative trying to make it in the big city. It was tiny and dingy. The baseboards were dirty, and layers of paint flaked off onto the floor. There was a small kitchen that also served as the dining room and living space and a bedroom with a caged bird on the floor in the corner. I stooped down by the bird and pretended to be interested in it. I hate birds (they don’t have lips, and I don’t know how anyone trusts something that can’t smile), but chatting up the fowl creature felt like a good way to mask my nerves. Soon, a hipster young woman knocked on the door. I was relieved to have another woman there. The photographer explained that his friend, the woman, had just launched a new clothing line, and we would be shooting her look book.

The designer friend doubled as the hair and makeup artist. She basically applied black eyeliner and then smudged it with Vaseline. She rubbed the remaining Vaseline on her hands into my hair, black greasy eyeliner remnants and all. The shoot went smoothly, other than me having no idea what they meant when they kept telling me to look “strung-out.” After a few hours of photos and trying to shield myself while changing clothes in the corner, they sent me on my way. I wandered my way back to the Subway station and rode into the city to catch a couple of casting calls before calling it a day.

A few weeks later, I found myself back in that little birdcage apartment for another shoot. It was the same old drill. As we waited for his designer friend, he chatted me up like an old friend, asking about the jobs I had booked since I shot with him last. He mentioned that he was excited for us to shoot again so he could see how I had grown as a model. He laughed a little and nonchalantly added, “You know, it’s so funny that you mentioned that you were a Mormon first thing that morning. Typically, when I shoot with brand-new models, I slip a little something in their drink to help them relax. But I knew a Mormon guy in college, so I know Mormons don’t do drugs.” I’m sure my face didn’t look very modelesque as I tried to stomach what he just said. Weirdly enough, it wasn’t just that he said he regularly drugged my peers and almost drugged me that creeped me out. It was how he said it. This guy not only felt comfortable drugging adolescent girls who are essentially alone with him in his apartment, but he also felt comfortable openly talking about it in a joking, lighthearted manner.

I wish I could say I stood up, flipped his crap kitchen table, and stormed out while calling the police to report him. I wish I could say I even told my agency about his brazen brag. Nope. I sat quietly, like a good little model, and did my best to fake a smile as he laughed. I was 16 and terrified, and I just wanted to do a good job. I wanted to please him and my agency. I knew what he was saying was bad, but I had no idea how to handle that situation or the many battles that lay ahead of me as a model. Over the next two years, there would be more promptings that helped me avoid similar encounters, but not always.

I feel deeply blessed for the divine intervention that protected me on this occasion, but in this fallen world, heaven can’t always take the bullet for you. Sometimes, no matter how many days you’ve gone without missing scripture study or how many Honor Bees you have around your neck, bad things do and will happen. It doesn’t mean Heavenly Father and Mother are distracted, and it most definitely doesn’t mean They are punishing you or love you less. It just means you’re a human having a human experience. Francine R. Bennion wisely taught that the knowledge of the gospel of Jesus Christ “makes sense of love and joy and miracles but also of suffering and struggle and lack of miracles.” The doctrine of Jesus Christ explains all human suffering, but it does not prevent it. “Nobody is manipulating every human decision that would affect every human experience. If God did, we would have the kind of existence now that Lucifer offered permanently.”

Our Heavenly Parents are good parents who allow Their kids to learn and grow through experience. They are not helicopter parents waiting to swoop in at any sign of trouble to shield you. There may be times in your life that it feels like any good Heavenly Parent would have spared you. In fact, it’s better that you expect a handful of those moments. Just like a poor petless kid may yell, “When I’m a mom, I’ll let my kids have as many dogs as they want!” (Sound familiar, Mom and Dad?), not fully understanding what it means or the work required in or ramifications of having the zillion pets they dream of. We, too, may wish our Heavenly Parents would parent us differently without fully understanding Their motives or wisdom.

Again, our lack of understanding isn’t bad. In fact, it is exactly why we came to this earth. We are all new faces here to have experiences that expand our knowledge through the practice of faith and hard work. Faith is striving to believe that Heavenly Father and Mother love you regardless of what you do or don’t do because you are part of Them and striving even harder to return the favor.

Rosemary Card is the author of Model Mormon, host of Q.MORE, and founder of Q.NOOR. Q.NOOR is a line of temple, baptism, blessing dresses and more designed to help more women feel at home in the House of the Lord. She lives in Utah with her dog, Ted. More of her work can be found at https://www.instagram.com/qnoor_templedress/

Mormon Life Spirit PromptingsSpirit,Promptings,Mormon Life
Comments and feedback can be sent to feedback@ldsliving.com