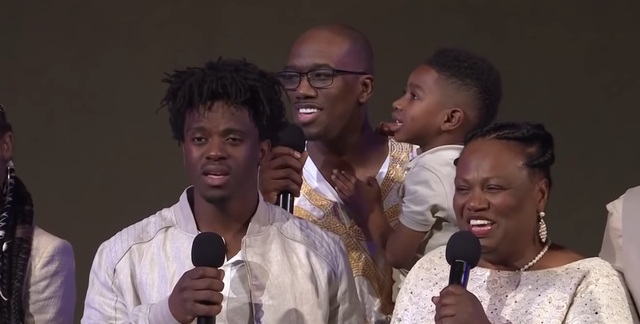 In 2018, the Church celebrated the 40th anniversary of the 1978 revelation on the priesthood with a celebration. Held in the Conference Center, the celebration featured a family who performed a medley of Primary songs and made an indelible impression on all present.

The oldest son in that family is a man named Mauli Junior Bonner, and that night changed his life.

The following conversation is a small excerpt of a recent episode of the Church News podcast. You can listen to the full episode here or in the player below.

Richard E. Turley Jr.: Many Latter-day Saints, of course, know about the June 1978 revelation on the priesthood and the tremendous impact that had on the ongoing history of the Church, but relatively few know about the early African American experience in the Church. And you, of course, are an artist, but you encountered that kind of history. Tell us how you encountered that.

Mauli Junior Bonner: Well, I didn’t know I was going to be given the history when I was given it. It was the “Be One” celebration. My family, the Bonner family, we sing together, and we were asked to sing at the “Be One” celebration that was commemorating the 40th anniversary of the priesthood ban being lifted. And it was an incredible experience. Incredible. During that broadcast, while I’m backstage, I was learning about early Black history in the Church through that celebration, and it was incredible and inspiring. So it was then—and I had heard some things from my mother because she converted the same year I was born, and she spoke of Joseph Smith and how he ran for president on an anti-slavery platform—and learning this new history at the “Be One” celebration changed me, Rick, it made me want to dive in and learn so much more. …

Richard E. Turley Jr.: It was an event held in the Conference Center and sponsored by the First Presidency, was it not?

Mauli Junior Bonner: Yeah. And it was the most special moment for me — and there [are] so many moments during that—but it was being able to sing, and see out in the audience and see tears in our leadership’s eyes and mouths open, and they were basking in the Spirit that I was basking in, and it was just such a beautiful, beautiful event. I think that is probably one of the greatest moments of my life.

Mauli Junior Bonner: So, you would think that learning that would make me say, “Wait, what? In the Church, there were slaves? I’m done. I’m out.” It just makes sense that that would rock my testimony, and it did the opposite. And I didn’t understand it, I didn’t understand why. Why was this strengthening my testimony to learn of these enslaved pioneers who were a part of the early Church and going through those same struggles, including their enslavement? It strengthened me. It made me want to learn more about them, and why they stayed, and what their experience was like. So it did not shake me at all. It rooted me.

Richard E. Turley Jr.: Often, when we use the term you just used, “pioneers in the Church,” people don’t stop to realize that we have pioneers all over the globe. Usually, that term “pioneers” is reserved for those who crossed the plains in 1847, or who arrived in the Great Basin before 1869. I think relatively few Latter-day Saints recognize that that original pioneer company that crossed the plains and arrived in the valley in July of 1847 included three African Americans. When did you first learn about that?

Mauli Junior Bonner: So about a month after the “Be One” celebrations—this is 2018 in July—after the celebration, I just dove in. I called historians up—Amy Thiriot, she was so generous with her time in giving me books and sending me where to look for journals, and then she passed me to Paul Reeve, who also would answer questions, and I would have a laundry list of questions, and they would just go through them all. It was during that time that I learned about the many enslaved pioneers. I learned a little bit about Green Flake during the “Be One” celebration, and that was the key. That was what opened the door. It was during that next month that I really learned about a large group of people—my people.