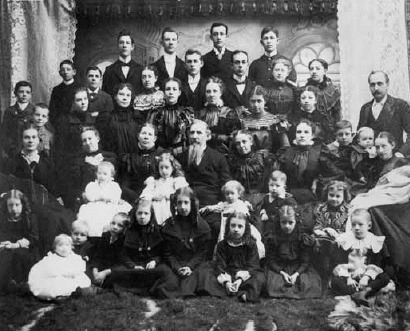 How the Church's New Article on Polygamy Will Increase LDS Confidence

Now is an era of fascination with polygamy in American culture. This arguably started with the notorious HBO series Big Love; currently several reality shows depict polygamy, like Sister Wives and, more recently, My Five Wives. If America weren't oddly fascinated with it, these shows wouldn't keep getting picked up. (Aside from popular culture, polygamy is also in the news. Just a week ago, Federal Judge Clark Waddoups of Utah ruled part of Utah's polygamy law unconstitutional.)

Now, back to us modern Mormons. Who among you didn't get a little uncomfortable reading the names of those shows? For me, at least, something inside groans at the mention of polygamy––which is odd, because as a descendant of early Mormon pioneers, polygamy runs somewhat literally in my veins. Mary Branagan Crandall, Julia Ann Crandall, Catherine Greenwood, Mary Ann Payne––these are just some of my forebears who lived lives as plural wives; all strong women whom I am proud to have descended from, but participants in a controversial practice I know very little about.

And I think that's why Mormons are historically so uncomfortable with and defensive about the subject. Even though polygamy is likely what Mormons are best known for, generally speaking we know very little about it. Many LDS Church members when pressed on the topic could probably only respond with a simple "we haven't practiced polygamy since the 1890s." After all, outside of brief treatment in a Sunday School lesson on D&C section 132, that's all many of us have ever really heard about it from an official Church perspective.

No more. With the publication of the Church's recent "Plural Marriage and Families in Early Utah," the Church has given members and investigators quick and easy access to gaining firmer footing on the topic. In just under 1500 words, the Church has provided an official resource for the "whys" and "hows" of this controversial topic. Just as earlier ignorance on the topic might have engendered anxiety in many members, this new knowledge can give us power.

Here are, in my opinion, the most significant contributions of the new article:

1) The "whys" of polygamy are clearer now that they come from an official Church source. For a long time, members have given educated guesses as to the reasons polygamy was instituted. Though the article admits that "Latter-day Saints do not understand all of God’s purposes for instituting, through His prophets, the practice of plural marriage during the 19th century," several reasonable explanation are provided, citing scriptural evidence. These reasons include increasing the "number of children born in the gospel covenant in order to 'raise up seed unto [the Lord]' (Jacob 2:30), providing marriage to all who desired it, inequality of wealth diminished, uniting a diverse immigrant population, and increasing group unity. In addition to being clearer than before, these reasons are also understandable and relatable, making our connection to our religious forebears stronger.

2) It clearly dispels many myths of polygamy. Some of these include: Those who participated in polygamy were more than likely in plural marriage with three participants (one husband, two wives––this was the case about 2/3 of the time). Extra consideration was given to women, since Church leaders recognized it could be particularly hard on them; this included opportunities to divorce and remarry. About half of those in the Utah Territory in 1856 lived in a polygamous family as a husband, wife, or child at some point in their lives; that number went down over time.

3) The article makes Mormonism's early polygamists more human. It's easy to think of polygamists as part of a very large, old family photo, but the facts of this article take the experience to a whole new level. Finding out that divorce was available and occurred in a time when divorce was rare in America communicates the difficulty these Saints faced––and the fact that the Church recognized that difficulty. (In the footnotes of the article, it says Brigham Young "never refuses a bill [of divorcement] on the application of a wife, and NEVER when she INSISTS on it.”) It's humbling to realize the difficulties and sacrifices many endured during this time and profound to recognize, as the conclusion of the article says, "despite the hardships some experienced, the faithfulness of those who practiced plural marriage continues to benefit the Church in innumerable ways."

4) It builds greater foundation for confidence in who we are as a church and people. This one hits on a personal level. As one who descends from polygamists, hearing the the hows and whys behind early plural marriage from an official LDS Church source makes me more confident in where I've come from. It's no longer something to shun or uncomfortably laugh away––it's a fact of my history, both personally and religiously, and I feel more confident in owning to it.

There are other important contributions the article makes to LDS culture and identity, but I'll leave those up to you to discover. If you haven't read it yet, I highly recommend you do. This topical article, available through the Gospel Topics page on LDS.org, and the other topic articles the Church recently published really are must-reads for LDS Church members, both for the courage they can build for answering questions about Mormonism and for the confidence they can give us individually in understanding our past.