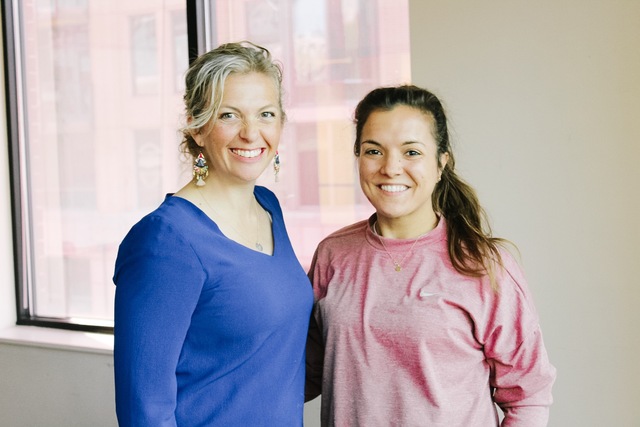 Eva Witesman is best-known for her 2017 BYU Devotional address entitled: "Women and Education: 'A Future Only God Could See for You.'" In the address, Eva challenges the idea that there is only one path for Latter-day Saint women and that we each have spiritual gifts that only need to be accessed. Witesman was prompted to trust the Holy Ghost in her decision-making process, when she received an unexpected message while being set apart for a calling. Witesman put her faith in the message and set on her own path, even if it was very different from those around her. In this week's episode, All In host Morgan Jones talks with Witesman about how to access these spiritual gifts, what might be holding you back, and using the spirit to discover your own path.

Morgan Jones: What helped you recognize that there are different paths for different people and that it was okay to pursue whatever the Spirit communicated to you?

Eva Witesman: Yeah. I mean, I think the messages that I'd always received, whether from across the pulpit or from my family, the message was always, "You need to pay attention to the Spirit and what the Spirit is telling you." And if my experience hadn't been so very clear and powerful, I don't know that I would have had the courage to follow that path. So I found out that I was pregnant with my eldest daughter after I had applied to the master's program and after I'd gotten in and planned to go. And then I was on bedrest, pregnancies are especially complicated for me, so I was on bedrest and actually missed the first few weeks of my master's program. And so when I got there, I wasn't sure, I mean now that I was going to be a mom, I wasn't sure that this was what I was supposed to be doing at all, right? I think I talked about this in the devotional as well, but I just sort of had that question constantly burning, because I'd had the same Young Women lessons and I knew motherhood is a big job. It requires all hands on deck, and it requires passion and attention and knowledge and time. And I was like, "I don't know how I'm going to do both of these things, or even if I should. If I'm supposed to, if I meant to, if that's okay for me to do." And so I'd been praying about this a lot. And in our new ward, we had either two or three nurseries. I can't remember at the time if we had two or three nurseries, but it was a very young, student-driven ward with a lot of very young families. And they needed another nursery later. And that's what my calling was. And as I was being set apart by one of the counselors in the bishopric, and he did not know me, we'd never had a real conversation. I was new in the ward, there was just no reason that we would have spent a lot of time talking. But he put his hands on my head to give me a Priesthood blessing to call me as a nursery leader, and you guys have been set apart for callings before, right? Like, sometimes they're really beautiful blessings. But often, you're just sort of like, given what you do.

Eva Witesman: "Here's your calling, you know, you're going to do a great job, the Spirit's going to be with you, you know, go on your merry way." So he puts his hands on my head, and he does all of that. And then there's sort of this pause and then he tells me that Heavenly Father wants me to continue to pursue my education. Like this is in a Priesthood blessing where I was not asking the priesthood holder for this at all. I was not seeking counsel about this, I had told no one in the bishopric that this was a question that I had. I don't think I'd even talked to my husband about this question. So this, again, was the Spirit speaking through Priesthood power to give me this message that I needed to continue and that's why I finished the master's degree, otherwise I would have either stopped or been very conflicted the whole time.

Eva Witesman: And I don't know why I was given the privilege of having that clarity. When I know there are lots of people who, even though they pray, just like I did, and ask, just like I did, don't get that same kind of clarity and don't get that voice in their head and don't have the overwhelming spiritual experience that they can count on for the rest of their lives. I don't know why it was that way for me. But I do feel like it's important for me to share these stories, to let people know that the spirit is real, and individual guidance is real, and that we should each feel empowered to follow our own path.

And you mentioned sort of our culture and our society and sort of like the "right way" to do motherhood. And one of the things that I sort of always come back to is our pioneer forebearers. And I think about you know, "What would a Pioneer woman who was asked to walk across the plains with her family, as a mother, what would she say to someone who said, 'You know, women aren't supposed to work outside the home?'" I mean, I think she would laugh. And she'd say, "Well, who's gonna make the candles, and who's gonna pluck the chickens, and who's gonna help build the shelter? And who's going to do all of this work if we're not doing it?" Like, you know, part of our job is to teach the children how to do this work, to teach the children how to run a home, to teach the children how to run a society. And the women of the Church, especially our pioneer women, they were so busy doing things outside of their homes, that they were already going to create a society for giving service to others. They had enough and to spare in terms of energy, and the ability to contribute to the world inside their homes and outside of their homes. And it was so strong that the Prophet Joseph Smith was like, hold up like, let me go pray about this because I think the Lord has something more in store for you. And that's the advent of the Relief Society, right? So the idea that we've ever been asked to confine ourselves to within the walls of our homes, I think is a faulty notion. Have we been asked to make that prime? Absolutely. And you had better know that my children come first, my family comes first. But part of the way that I teach them is by showing them what's possible in the world and showing them the work that I do, and engaging them in it. And trying to empower them to see the possibilities in their own lives by taking advantage of the possibilities in my own. And so I think it really depends on the person and their kids and their whole family dynamic and the husband's job, and what the qualifications are, and what the passions are that she's been given, or that she has sought for herself as a woman. And so all of those things, I think, come together, with the guidance of the Spirit, for own best benefit.