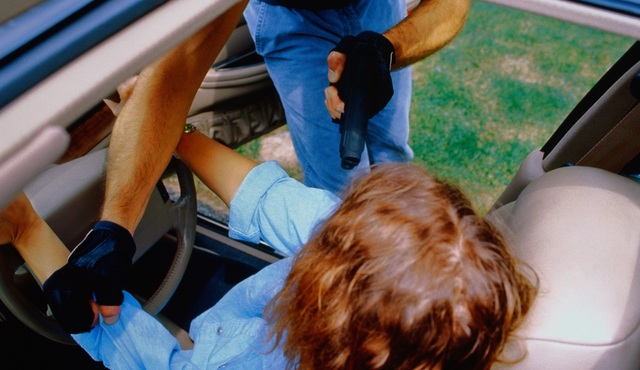 It was New Year's Day. Everything was closed, but I had to take a quick trip to the store and the bank. Patrick and I had been married for all of six weeks and were still working out the kinks in our finances. We had moved all our money over to his bank account leaving mine empty and then realized that I had automatic payments that would be coming out the next day we hadn’t accounted for. So, with some wedding cash in hand, I headed out to deposit some money at the ATM.

As I pulled up to the bank parking lot, I saw him. He was walking past the other two cars waiting in line at the ATM and walked right in front of me. I remember thinking how cold it was outside, and he didn’t look too bundled up.

A voice told me then I should go to the store first and then to the ATM, but I didn’t listen. I didn't want to be at the bank once it was dark, because, you know, that’s when bad things happen. So I waited. I didn’t feel alone because there were two cars in front of me. When it was finally my turn, I quickly made my deposit. I was just about finished waiting for my confirmation when I heard a voice loud and clear in my mind: “Don’t be afraid; everything will be ok.” He passed behind me again, I saw him in my rearview mirror, and then, within seconds, he was right next to me.

I wish I could say the next moments were a blur, like a bad dream. I wish I could say every detail isn’t captured in my mind. But it sits there every day. The barrel of his gun in my face. His tone of voice—not yelling, but firmly telling me what to do. He took my keys, my phone, my wallet. He wanted the cash he thought I was getting out of the ATM. I surprisingly explained to him calmly I was putting cash in, to pay bills. He waited while I undid everything I had just done so he could have his cash. He walked away quickly with a "have a nice day," and then threw my keys into the snow bank behind the car. He fled across the street and was out of sight within minutes.

Getting out of the car all I could think about was how much I wanted to get out of there. I just wanted to get home to my new husband, to have him make me feel safe again.

I began to dig through the snow to retrieve my keys. There was no hope of finding them. And then they came.

A car full of teenagers pulled into the parking lot. They were attempting to use the bank as a shortcut to avoid traffic. They drove past me but stopped just a few feet away. One of them stepped out of the car and asked me if I was okay. That’s when it finally hit me.

I told him everything that had just transpired, and he raced off in the direction my robber had taken. His friend quickly called 911 while the driver offered me her cell phone to call someone. I wanted to call Patrick so badly but realized that I had never bothered before that moment to memorize his phone number. So I dialed one of two numbers I know—my mother.

Naturally, she didn’t answer because no one answers numbers they don’t recognize. I left her a message that I had been robbed at gunpoint and was stranded in the parking lot and needed a ride home. I asked her to call Patrick and let him know what had happened.

The police arrived as I was getting off the phone. Then began a series of questions that would go well into the following weeks. What did he look like? What did he say?

My parents eventually showed up with Patrick in tow and all I wanted to do was disappear. This robber had taken so much more than just my possessions; he had taken my innocence. He took my trust in society. I still can’t use an ATM to this day.

A Letter from Prison

I received a call from my lawyer that my robber had written me a letter from jail, and my lawyer wanted to know if I wanted it. I went to her office and picked it up. Patrick held my hand as I read the apologetic words, the low point he had hit in life, and what he wanted to do to change. At first, I wanted to be angry. He didn’t have the right to be sorry; he had hurt me. He didn’t get to cry and get help. I needed that. Then that voice came back to me speaking softly into my ear, “Forgive him.”

I reread that letter a lot over the following weeks. I prayed to know if he was genuine in what he said. I wanted to know he had earned my forgiveness. But then I realized that it wasn’t my forgiveness he needed but God’s. So I asked my lawyer if she could give something to him from me, and I sent him a Book of Mormon.

Learning the Depth of God's Love

I lived in fear for quite some time after that, constantly looking over my shoulder. It took a long time for my heart to be healed. But when it did, I realized two very important things: 1) God loved me enough to guide me through a horrible experience and 2) God loved this man, too.

I look back and wonder, "What if I had listened the first time the Spirit tried to warn me? What if I had gone to the store first and visited a different ATM? What if the Lord just said forget it because I didn’t listen the first time He tried to warn me?" But His promise was true, even when I didn’t heed His counsel the first time, “I will not leave you comfortless, I will come to you” (John 14:18). He continued to be with me in that moment, to warn and protect me. He continued to show His mercy and love for me by guiding those teenagers to find me. I didn’t listen to Him at first, but He never gave up on me. That’s how much The Lord loves me. That’s how much He loves all of us.

There is no escape from pain and suffering in this world. We all have our own battles and trials to endure. But as we learn to hear the voice of the Spirit, one truth will always ring out loud—the Lord loves us. He will never abandon us. “Peace I live with you, my peace I give unto you” (John 14:27). The Lord promises us peace, a calm through the storms of life. He has promised us hope through His Atonement. He has promised us strength through Him if we but believe.

I know the Lord guided me through this experience and has helped me find peace again in my life. I hope He has guided this young man to find peace as well. And I know that He will guide all of us as we learn to listen to His Spirit and allow it to heal our wounds and carry our sorrows.

Katie Liddle is a wife, mother, and aspiring author as well as an avid cook, baker, and musician.