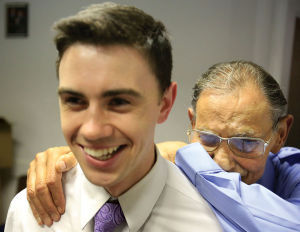 How the Mormon missionary movement continues to grow and change

Vigor Komar lives in a tiny apartment on a hill above Rijeka, Croatia - his bed tucked in the corner of the living room. He watches a small TV near the window. On the screen, it’s 1952. A very young June Carter lifts her long skirt to her knees and does a funny dance that’s half tap, half do-si-do. She’s laughing as she dances.

Komar has watched this moment a thousand times. He likes June Carter, but he replays this black-and-white clip from The Kate Smith Evening Hour for what comes next: Hank Williams.

The only filmed performances by Hank Williams were two appearances on the Kate Smith Show in March and April 1952.

On screen, he takes the stage and tells June Carter, “I got a song I wrote just ‘specially for you.”

Read the rest of this story at magicvalley.com