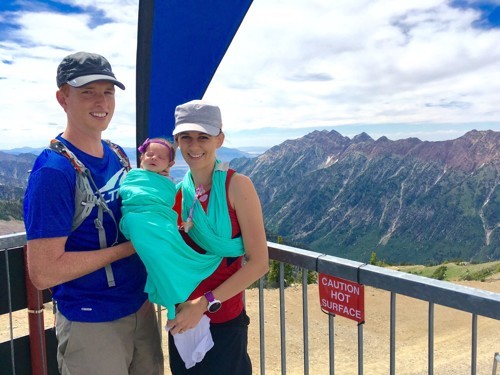 In 2009, a then-27-year-old Golden Harper embarked on what seemed to be the impossible: He started his own running shoe company during not only a difficult economic time but in a market that, by many accounts, was already established.

Fast-forward nearly a decade, and Altra is one of the leading running-shoe brands, bringing in an estimated $50 million in sales last year alone, according to reports, and sparking an acquisition deal with VF Corporation.

Even with all the success of a brand he started altering shoes using a toaster oven, Harper remains committed to the things he holds close to his heart: faith, family, and running.

Harper, now a husband and father who lives in Draper, says he learned how to balance life from his own father, Hawk Harper.

“I grew up working in my family's running store, Runner’s Corner, and my dad always taught me that if I did what the Savior would do, then good will always come back."

Golden Harper has noticed how his calling as a teacher in the elders quorum in his ward of The Church of Jesus Christ of Latter-day Saints parallels the way he approaches his business.

“As a teacher, I get to lead discussions and learn from people around me, and together we work toward long-term solutions,” Harper said. “It’s the same with Altra. I take pride in working with people with the goal of living life better through a healthy approach to exercise. Regardless of what you’re doing in life, we all need to learn how to find long-term solutions.

“I also firmly believe that your beliefs shape what you do,” Harper said. “As a believer of Christ, I do my best to filter things through a lens of what Christ would do.”

He applied this several times in his life, including a time early in the company's development when he was looking for places to manufacture the shoes. One of those places was China.

“I heard horror stories about building running shoes in China, but I felt it was important for me not to rule it out,” Harper said. “When I went over there, I found the opposite to be the case."

He was able to work with a manufacturing company that listened to his goals about producing shoes.

"By holding strong to my beliefs, keeping prayerful in the process, I know that Altra was able to build a better product and in turn sell more shoes," Harper said. "I was also able to meet wonderful people who I came to love.”

Spending time with his wife, Britta Harper, and their daughter, Journey, is another part of keeping a balance in life. Some memorable times came during recovery from an accident.

“A few years ago, I was injured badly in a snowboarding accident, making it impossible to run,” he said. “During my long road back to health, I spent a lot of time hiking with my wife and daughter. Those were some of the most memorable times for us.

"Now that I’m able to run, Britta and I will take Journey up in the mountain trails near our home while we take turns doing our runs. It is important that we make the best of the time that we have together.”

Golden Harper, who has long been an elite athlete and set a world-best marathon record of 2:45:34 at age 12 for his age group, still loves to compete in the sport that started it all.

However, with all he has going on, there is little time to devote to the training it often takes to compete at an elite level. Even so, Harper has found time for that, too, following a program that requires only 25 to 30 miles per week.

Harper recently ran a 1 hour and 10-minute half-marathon at Runner’s Corner’s Hobble Creek Half in July and finished the St. George Marathon in 2 hours and 30 minutes in October.

“My dad always taught me that if you put your family, faith, and job as priorities, you can trust that other things will work out,” Harper said.

And so far, things seem to be working out pretty well for this 36-year-old husband, father, church teacher, founder/CEO of a worldwide running shoe company and elite runner.