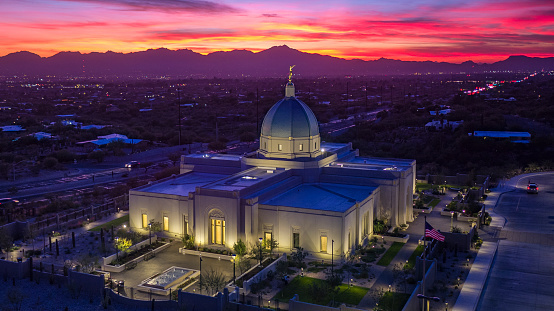 byBrad Wilcox, excerpted from "The Continuous Conversion" | May 01, 2019

After receiving her endowment, one sister said to me, “I was disappointed I didn’t see more about Christ’s Atonement.” I was stunned. She may as well have said she just walked through a forest and didn’t see any trees. As our discussion continued, it became clear she had expected to see portrayals of Christ’s suffering in the Garden of Gethsemane, pictures of Him on the cross, and depictions of His empty tomb, so she was surprised when none of these were presented directly.

I explained that in the endowment, instead of seeing these specific moments portrayed, we learn why they were necessary in the first place and are assured that they were planned from the beginning. We learn of the limitless freedom and opportunities awaiting us because of Christ’s Atonement. In many Christian churches and cathedrals this sister could have seen beautiful depictions of the passion of Christ, but only in the temple can she learn the purpose for the passion.

Elder Russell M. Nelson has written, “Temple ordinances and covenants teach of the redeeming power of the Atonement” (“Prepare for the Blessings of the Temple,” 49). Similarly, Andrew C. Skinner has taught that “the connection between the temple and the Atonement is not tenuous or weak at any level” (Temple Worship, 52; emphasis in original). Sometimes these connections are obvious. Other times we must search for them. Either way, “All things which have been given of God from the beginning of the world, unto man, are the typifying of him” (2 Nephi 11:4).

Some see a rainbow as nothing more than light. Others see a token of the Lord’s covenant (see Genesis 9:13). Some Israelites saw the brazen serpent as nothing more than a snake on a pole (see Numbers 21:6–9). Others saw the Savior lifted up on the cross (see Helaman 8:14–15). At Christ’s birth, some must have seen the star as nothing more than an oddity, but “wise men from the east” (Matthew 2:1) recognized the “new star” (Helaman 14:5) and followed it to find the infant king. Because they saw Jesus in the sign, they ultimately saw Jesus. As we learn to recognize Christ in the ordinances, signs, and symbols of the temple, we prepare ourselves to one day recognize Him.

In ancient temples, priests were washed with water. The law of Moses required various washings, symbolic of the ultimate cleansing of the Atonement. Priests were washed preparatory to their temple service (see Exodus 29:4; 40:12). The high priest was instructed that “he shall wash his flesh with water in the holy place, and put on his garments, and come forth, and offer his burnt offering” (Leviticus 16:24).

Priests were anointed with holy oil, as were kings and prophets (see 1 Samuel 10:1, 24; Psalm 105:15). This anointing was performed to sanctify them (see Exodus 40:13; 28:40–41; Leviticus 8:12), a sanctification made possible only through the Atonement of Christ, who was the great Messiah, meaning “anointed one” (see Acts 4:27; 10:38). Also symbolic of the Atonement was the olive oil used in the anointing. Gethsemane was an olive garden, and translated from Hebrew, the word Gethsemane means “oil press.”

The sacred clothing of the temple reminded ancient priests of Jesus. Those who entered the temple anciently wore white clothes. When Christ came to the Nephites, He was “clothed in a white robe” (3 Nephi 11:8). Revelation 7:13–14 makes it clear that when the Saints are one day “arrayed in white robes” it is because they will “have washed their robes, and made them white in the blood of the Lamb.”

I am indebted to Donald W. Parry and Jay A. Parry for much of what I have learned and shared in this chapter about ancient temples and sacrifices (see Temples of the Ancient World and Symbols and Shadows). It was fascinating for me to discover that the sacred clothing worn by ancient priests was vital to their worship. Part of the priest’s vestments consisted of plain linen undergarments. When Adam and Eve discovered their nakedness in the Garden of Eden, God asked Jesus to make coats of skins to cover them (see Genesis 3:21). When English speakers think of a coat, we typically think of something worn over other clothing. However, John Bytheway once pointed out to me that the word translated as coat was actually referring to “an inner garment next to the skin (Leviticus 16:4), also worn by women, generally with sleeves, coming down to the knees” (blueletterbible.org/lang/lexicon). Putting on this special garment was symbolic of putting on Christ and letting His Atonement cover them (see Romans 13:14; Galatians 3:27).

Along with this undergarment, the priest also wore robes over his clothing, including a headpiece, tunic, sash, and girdle (Exodus 28, 29, 39; Ezekiel 44:17–18). The Hebrew term translated as girdle could also be rendered as apron (see Genesis 3:7). Isaiah wrote, “He hath clothed me with the garments of salvation, he hath covered me with the robe of righteousness” (Isaiah 61:10; see also Job 29:14). Anciently if someone had shoes it was an indication that the wearer was a free person rather than a slave. Taking off shoes in the temple was an acknowledgment not just that the wearer was on holy ground (see Exodus 3:5; Joshua 5:15) but that the wearer was also willing to be God’s servant. Temple robes were seen as both royal and priestly in nature (see Exodus 19:6). Just as Nephi wrote of his “reign and ministry” (1 Nephi 10:1), ultimately temple robes reminded all wearers of their potential to reign like Jesus Christ, the King of kings (see 1 Timothy 6:15), and to minister like Jesus, the Great High Priest (see Hebrews 6:20; 9:11). 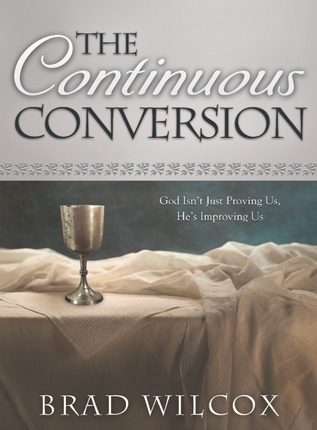 In this hope-filled book, Brad shares his keen understanding and testimony of the Atonement of Jesus Christ as it relates to our own conversion. Conversion occurs, he says, "when we stop trying to earn heaven and start trying to learn it. . . As we take each little step to show faith, repent, make and live covenants, seek the Holy Ghost, and endure to the end, we are not paying our way into heaven. We are practicing for it."