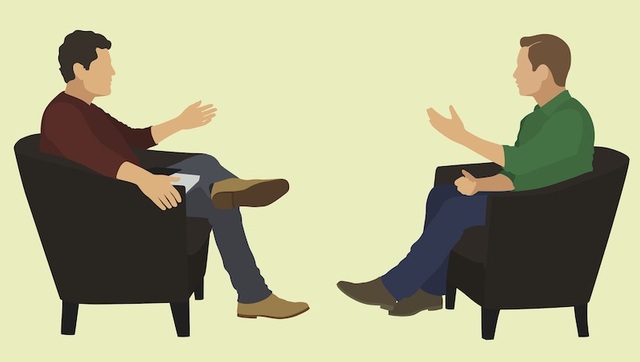 As long as you’re talking with someone else speaking a common language, it’s easy to assume that the words you’re both using mean the same thing. But in the polarized atmosphere of America today, that has become less and less true about more and more words.

Several years ago, I joined an ideologically diverse group of dialogue leaders in mapping out contested terms in America’s political lexicon for what we called The Red Blue Dictionary, including words like “social justice,” “constitutional,” and “truth.” Since co-writing a book called You’re Not as Crazy as I Thought (But You’re Still Wrong) with a Marxist, atheist man who is now a dear friend to me, I’ve been fascinated by the ways in which thoughtful and good-hearted people of different backgrounds arrive at varying conclusions about all sorts of things—including words.  Similar to the basic features of Darwin’s famous finches growing more and more distinct the longer they were divided, many of the basic words we use in society come to take on increasingly divergent meanings.

This includes the word “addiction.” To some people, the word conveys a level of unacceptable shame and hopelessness connected with its acknowledgment of a difficult struggle. The Merriam-Webster definition of the word does reflect a level of seriousness: “A compulsive, chronic, physiological or psychological need for a habit-forming substance, behavior, or activity having harmful physical, psychological, or social effects and typically causing well-defined symptoms.”

Compared with those who hear, “I think I’m addicted,” as despairing, however, others experience such a statement as an honest reflection of a painful reality they have lived with for a long time (whether connected with substance use, compulsive eating, pornography, etc.). In the 12-steps of the Addiction Recovery Program (ARP) of The Church of Jesus Christ of Latter-day Saints, men and women often acknowledge how transformative it has been to admit for the first time that they were facing something they couldn’t beat with their willpower alone. As the first step puts it:  “Admit that you, of yourself, are powerless to overcome your addictions and that your life has become unmanageable.” However scary this early admission might be, it’s precisely how so many feel after years of trying to break free from something negatively affecting their life.

That’s also what many people express along the path to more lasting freedom from pornography use. Despite the significant personal trials and relationship pain so often associated with ongoing pornography use, many end up admitting, “I’ve done everything I can to beat this, and I can’t stop!”

It’s reasonable to ask, of course: Could this sense of desperation and frustration mostly reflect a subjective impression that says more about the shame and despair so many people feel? That’s become a popular argument over recent years, with more and more people arguing that shame is the central issue at hand—while often asserting there’s no real solid empirical basis for pornography addiction compared with other addictions.

On the other hand, many who have spent years assisting those grappling with compulsive pornography use find these assertions distressing—especially given the remarkably consistent patterns in the available research literature. This includes, by way of summary:

It’s difficult for many of us to understand why so much research can be quickly dismissed by those with concerns about the addiction model. But that’s what often happens.

Regardless of what the research says, could it still be true that admitting you’re stuck is a hopeless, despairing step? Only if that’s the only step you take! For most people in the ARP program, that first step of honesty is followed by a second step: “Come to believe that the power of God can restore you to complete spiritual health.”

And a third step: “Decide to turn your will and your life over to the care of God the Eternal Father and His Son, Jesus Christ.”

This is not a hopeless path! It’s one supercharged by rediscovering faith in the omnipotence of Heavenly Father and His Son Jesus Christ and all that can mean for deep and lasting healing from addiction.

As many who have walked this path will attest, it’s only after acknowledging their true depth of need that they are able to exercise the faith necessary to find redemption. That’s why there is concern among many of my colleagues to witness ongoing efforts among some to discount the reality of pornography addiction—even with good intentions behind them (reducing shame, increasing hope).

A dear friend of mine was making progress in the 12-steps to overcome a pornography addiction until he was convinced by a well-meaning counselor that “the 12 steps were shame-inducing” (given their focus on the seriousness of addiction’s limiting power).

So, he gave up on the 12-steps, and his progress halted. He remains mired in the problem today.

Certainly, that counselor was trying to help him to feel more hopeful and less shameful. And I don’t doubt that within his office, that’s what it felt like his conversation was doing. But if he could see the longer-term trajectory he helped to prompt for my friend, I believe this counselor would be saddened and even alarmed.

To all who want to assist those facing compulsive pornography use, let’s be clear: there are ways to decrease shame and increase hope without denying the seriousness of this problem. I’ve been part of a team since 2012 which has reached over 200,000 people in 155 countries with encouragement to get on a path towards greater freedom from compulsive-addictive pornography use.

The level of desperation, sorrow, and heartache in those struggling with compulsive-addictive pornography use is profound. It is important to provide those individuals with hope, encouragement, and affirmation in every way possible. But as tempting as it may be to encourage those individuals to not be so hard on themselves because this isn’t that big of a deal, my team doesn’t take that route. We can’t. This is because from everything we’ve seen in research, this is a big deal—compulsive pornography use is objectively hard on so many good, precious parts of life, even in the absence of subjective shame.

Subsequently, without denying the reality of the problem, we consistently encourage gentleness and self-compassion, moment by moment, with individuals wherever they are on their journey.  We also encourage ongoing resilience when it comes to the necessity of rising again and again—no matter how long it takes. As part of our training, we educate people on the variety of life factors that can contribute to addictive patterns—including past trauma. We’ve found that as people take care of their physical health, work through past traumas, get more connected, and rediscover their purpose in life, that the underlying struggle with addiction does decrease markedly.

Making these lifestyle changes doesn’t cause pornography addiction to vanish, although it can help. Additionally, a variety of other mindfulness-based skills can be useful for working through “surfing urges” (feeling the desire to view pornography, but not following it).

Of course, mindfulness, trauma work, and lifestyle adjustments are all hailed by those critical of the addiction model. But once again, I would point out that it’s not necessary to deny the seriousness of addiction in order to appreciate the broad scope of available supports to help move people along to longer-term healing. And based on the many people we’ve seen move towards lasting freedom, there’s evidence that denying one’s addiction can inadvertently draw people away from the deeper recovery so many people really do want. We’ve seen in our work that someone who makes a variety of lifestyle changes while denying the seriousness of their addictive patterns will often still end up living with the compulsion for many years to come.

To all who desire to help someone facing the seriousness of a pornography problem, yes, let’s provide hope. Yes, let’s reduce shame. And yes, let’s encourage broader life changes.

But if we simultaneously minimize the addictive nature of pornography, we might be subverting all the other good we’re doing. Like the counselor described above, those who honestly want to help might be setting people up for shorter-term relief, but longer-term failure.

In the end, perhaps the answer to this confusion is similar to the situation with other contested words. Rather than rejecting or blacklisting a certain word (which is happening on both sides of the political spectrum), let’s acknowledge it has come to mean very different things to different people. Instead, we can be curious and ask the question: “What do words like ‘constitutional,’ ‘social justice,’ and ‘addiction’ mean to you?”

That doesn’t suggest this is all mere semantics but instead draws attention to the variations in ways that a challenging experience can be talked about thoughtfully. For those who experience the word “addiction” as disempowering and discouraging, by all means, find another word to describe the struggle you face: “compulsion,” “problem,” “struggle,” “challenge,” etc.

At the same time, we can also do a better job acknowledging that the “addiction” label can sometimes feel inadvertently discouraging—especially to young people. It’s a problem if we’re labeling a 10-year-old grappling with a new pornography habit with the same word we use for a 45-year old on year 15 of trying to quit. And we need to refine and nuance our language accordingly.

Yet once again, the answer may not be to discard terms entirely but instead to clarify the different nuances in usage among us. And thus, given the many who experience the word “addiction” as empowering and clarifying, let’s also appreciate the way in which this term can constitute the beginning of a deeper search for help and self-understanding, along with finding greater hope and freedom.

If it’s true that there are a spectrum of legitimate ways to make sense of pornography problems (I certainly believe that), then here’s a simple rule that might help everyone involved: let’s allow the individual who is struggling to define their own problem with whatever language resonates most with them. And let’s provide people with the space, consideration, and all the support they need to be hopeful and abundantly loved as they seek deeper healing in their lives.

Jacob Hess is the Executive Director of The Council for Sustainable Healing and on the board of the National Coalition of Dialogue & Deliberation. He and Carrie Skarda, Kyle Anderson, and Ty Mansfield recently released the book The Power of Stillness: Mindful Living for Latter-day Saints with Deseret Book.

Latter-day Saints are great at getting things done. But sometimes an excessive focus on "doing more" can take us to a place where we're mostly going through the motions—and missing the deep, rich spiritual power that can come from being still. Using Latter-day Saint vernacular and examples, The Power of Stillness explores ways in which mindfulness can help deepen our conversion to the gospel. Infusing our homes with more stillness, silence, and space can reinvigorate the joy inherent in our faith and help us feel calmer, more present and engaged in our lives, and more spiritually connected to our Savior.