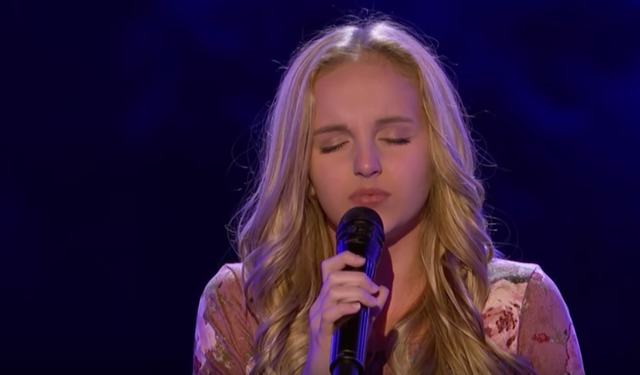 Evie Clair gave another unforgettable performance on America's Got Talent. At just 13 years old, Evie's soulful voice caused judge and Spice Girl Mel B. to tear up as she sang Macy Gray’s “I Try."

Evie says her motivation for singing on the show was her father, Amos, who is battling stage 4 colon cancer. Though the judges noted the performance wasn't flawless, they couldn't help but be touched by the emotion in Evie's voice as they chose to advance her to the next round.

“You know, I’m a father of two girls and a son and when I listen to you, it’s the sound of an angel singing to her daddy," Howie Mandel said. "I don’t think you can ask any more of a performer than to move your heart and I feel moved."

Simon Cowell added, "What you gave us just then though, you gave us heart and that means a lot.”

After her performance, Macy Gray tweeted about the sweet song, adding to Christina Perri's praise of Evie from her first performance on the show.

hi, @evieclair! thanks so much for choosing my song for this special moment in ur life! ur incredible! im sending so much love to u & dad ❤️ — christina perri (@christinaperri) June 21, 2017

Evie Clair charmed the America's Got Talent judges in her first performance from the moment she stepped on stage, making them laugh with the fact that her small hometown, Florence, Arizona, had five prisons and little else.

But then, Evie Clair stole their hearts when she shared the reason she was there to sing: "My dad was diagnosed with stage 4 colon cancer and they gave him a five percent chance to live and he still continued working and supporting our family. So tonight, I'm here to sing for him."

Evie Clair sang “Arms” by Christina Perri, a song with special significance for her and her father, Amos Abplanalp.

“When my dad is having rough days, then I go to his room and I sing him this song to help him feel better and just to give him comfort and strength to continue fighting,” Evie said.

"You are unbelievably brave for what you told us tonight," Simon Cowell told Evie.

Amos Abplanalp discovered he had cancer in April 2016. "Amos is an LDS Bishop in [Florence,] Arizona and a psychological professional counselor at a prison. His first operation was unsuccessful and left him with a colostomy. He has continued as bishop and has been given strength from family and friends and blessings from above to do so," the video description says on YouTube.

On a family blog, Evie's mother, Hillary, recently posted, "Our Creator is aware of each of us in ways we can’t even comprehend. He watches over us and wants to help us understand His ways. Pain is only a small moment in the vastness of eternity and can serve a purpose to bring us closer to the One who suffered all, if we let it."