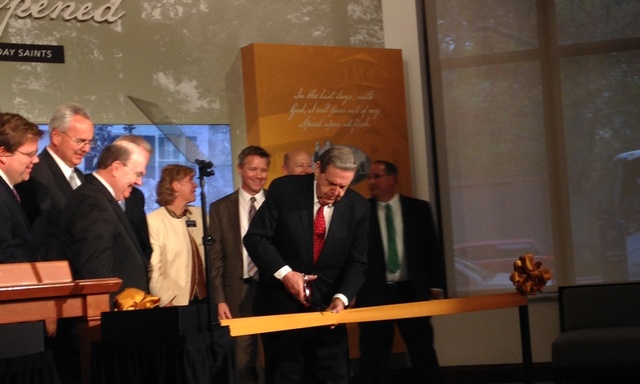 The newly renovated Church History Museum, located across the street from Temple Square, officially reopened this week with a special ribbon-cutting ceremony.

Plans for a Church History Museum have existed since 1843. Though the saints did not stay in Nauvoo long enough to create one, within the first year of entering the valley, they began work on it again. Brigham Young called for the saints to collect "rare specimens of natural curiosities and works of art that can be gathered and brought to the valley…from which, the rising generation can receive instruction."

As the beautifully refurbished Church history building prepares to host its first flood of new visitors over conference weekend, here are a few extra special items to look for:

1. Cutting-edge technology and interactive elements, including a round theater room.

Besides new touch screens, reenactment films, and replicas of places like Liberty Jail and the Whitney store, there is also a unique 220-degree theater room. The theater will play a new film version of the First Vision story with, according to Elder Holland, "both sight and sound enveloping the visitor as if we too had been in the sacred grove that day." The wall is composed of over 7,000,000 pixels and is over 22 feet, 8 inches wide.

Though the seer stone itself is not on display, large photographs of it are featured in a special exhibit talking about the translation of The Book of Mormon. The display on plural marriage highlights stories of faith and trial during the contested time in Church history.

3. Hyrum Smith's trousers and vest from when he was martyred.

Along with these delicate, unique artifacts, also on display is John Taylor's famous pocket watch, which allegedly saved his life when he was shot in the small room in Carthage Jail.

4. An original window from the Kirtland Temple.

The window, which was actually crafted with the help of Brigham Young, houses a benched area with reverent music and some incredibly beautiful artwork about the Kirtland temple.

In the new exhibit, there are 223 artifacts, 34 documents, 30 pieces of art, and 34 artifact replicas. That means that of the 321 items on display, a majority of them are actual historical artifacts. There were 996 items removed from the last exhibit, which followed the journey of the early pioneers.

For more information, check out this neat sneak peak from Mormon Newsroom, or find out museum visiting hours on history.lds.org. Because, as Elder Holland reminded during the ribbon-cutting, "nothing compares to seeing something with your own eyes."