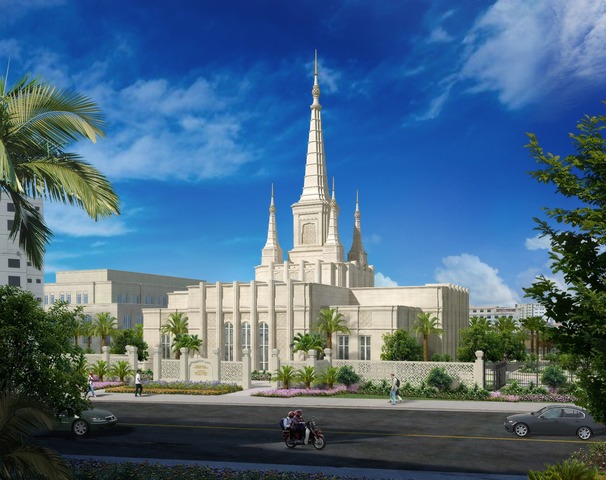 President Russell M. Nelson of The Church of Jesus Christ of Latter-day Saints brought glad tidings Tuesday night to hundreds of gathered Church members at the Premier Centre Sen Sok in Phnom Penh. He unveiled an artist’s rendering of what will become one of the Church’s most sacred worship spaces—the Phnom Penh Temple.

“Isn’t it beautiful?” the prophet said as the image of the coming temple displayed on a large screen in the auditorium. “I don’t know when the temple will be completed. But I do know that, difficult as it is to construct a temple, it’s even more difficult to build a people ready for the temple. Preparation for the temple includes members of your family. Your preparation will bless them, too.”

An important part of that preparation, President Nelson said, is understanding the temple recommend interview questions that each Latter-day Saint must answer prior to entering a house of the Lord.

“Such questions will be asked of you. Your answers will be held in strict confidence. Your leaders and you will work together in preparing you to be worthy to receive the blessings of the temple,” President Nelson said during his speech that was transmitted to all congregations in Cambodia. “I promise that as you become worthy, miracles will come into your life.”

Temples differ from the Church’s chapels, where all are welcome to attend Sunday services and other weekday activities. It is in temples that faithful Latter-day Saints participate in sacred rites such as marriages that unite families forever and proxy baptisms on behalf of deceased ancestors who did not have that opportunity. The Church’s 166 dedicated temples scattered throughout the world are considered the most sacred spaces on earth. It is in these sacred structures—each with the words “house of the Lord” etched onto its exterior—that Christ’s teachings are reaffirmed as members strive to follow His example. Temple worship is therefore a sacred privilege.

The Phnom Penh Temple, first announced by President Nelson in October 2018, will be located on Russian Confederation Street, between the Cambodia Institute of Technology and the Institute of Foreign Languages near the Royal University of Phnom Penh. The temple will provide worship opportunities for Cambodia’s 15,000 Latter-day Saints.

The 95-year-old prophet also noted the coming bicentennial of Joseph Smith’s vision of the Father and the Son, known by Latter-day Saints as the First Vision and the beginning of the Restoration of the gospel of Jesus Christ. That restoration, President Nelson said, has four fundamental cornerstones: (1) the knowledge of a Godhead consisting of the Father, His Son Jesus Christ, and the Holy Ghost; (2) prophets on earth who speak for God; (3) scripture as a “tangible anchor to eternal truth” and “a strong witness of the divinity of the Lord Jesus Christ”; and (4) restored priesthood authority.

President Nelson reminded the many youth who were present of their “religious responsibility to get a good education.” This education, he said, is the “difference between wishing you could help other people and being able to help other people. Get all the education you can. Strive for spiritual and temporal self-reliance so you don’t have to depend on anyone else for your temporal or spiritual progression.”

The prophet concluded by asking all Cambodian Saints to be upstanding citizens in their community.

“Be part of the solution rather than part of the problems that always occur in the governing of any nation,” he said.

Sister Wendy Nelson and Elder D. Todd Christofferson of the Quorum of the Twelve Apostles and his wife, Kathy, are with President Nelson on this seven-day trip to four southeast Asia countries. Each spoke at the Sunday evening devotional.