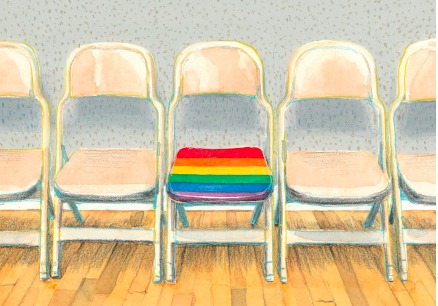 "You Are My People": Inactive Gay Mormon Shares Powerful Insights After Attending Church for the First Time in Years

I went to an LDS church service yesterday for the first time in years.

When I walked through the double glass doors into the foyer, I was greeted by Heinrich Hofmann’s Christ and the Rich Young Ruler. It is a painting of Christ in a red robe and draped cloak extending his arms out by way of invitation to a young man whom Christ bids to “Come and follow me.” A framed canvas print of this painting still hangs in my living room.

A woman in her mid 20s was seated on the couch in the foyer as two toddlers scrambled over her lap, each vying for a spot there. Through the closed doors of the adjacent chapel, I could hear the faint refrains of the sacrament hymn “God Loved Us, So He Sent His Son” being played on the organ.

The words of the third verse, my favorite, immediately started playing in my mind:

What debt of gratitude is mine,

That in his off'ring I have part,

And hold a place within his heart.

I was caught off guard by the realization that I still have every word memorized.

I stood outside the chapel doors until the organist stopped playing and I could hear the muffled sounds of a halting teenage boy’s voice over the PA system offering the sacrament prayer on the bread. I made my way through the familiar maze of the LDS meetinghouse to the cultural hall, where the meeting I was invited to attend was being held.

I stood outside the doors of that meeting, which was already in progress, and hesitated to open them. It is a strange feeling to know the exact smell of the loop pile carpet in the hallways, the precise feel of the bar pressing in to release the cold water from the two-tiered drinking fountain, the towering, antiquated appearance of the faux-wood, accordion-style room dividers, and the sound that rubber-footed metal folding chairs make on the waxed gymnasium floor under the shifting weight of the tired, hungry ward members gathered there—all without ever having set foot inside this particular meetinghouse.

I know the sights, sounds, smells, and tactile sensations of this, and most, LDS ward buildings as well as I know anything because they were the first public places I ever encountered outside the walls of my own home. I was born and raised a Mormon, and wherever my life may have taken me since, the visceral knowing of that fact still courses through my veins.

Despite this deep-rooted familiarity, or because of it, I was hesitant to accept my friend’s invitation to attend this meeting. I stopped attending LDS church services regularly after coming out as gay 10 years ago—the same year the First Presidency wrote a letter to be read aloud in LDS congregations asking Church members to devote their time and resources in support of Proposition 8, and similar referendums around the world, defining marriage as being only between a man and a woman.

Imagine my surprise, then, to get a Facebook message from my friend saying the bishop and his wife in her mom’s ward in Riverton, Utah, had organized a meeting for and about the needs of LGBTQ Latter-day Saints. They had invited their entire ward to attend. They were unsure how many would come, but they wanted her to tell all her LGBTQ friends they were welcome there.

She told me who would be speaking: two gay male friends of mine (both still active in the Church), a dear lesbian friend who recently parted ways with the Church and is now married to her incredible wife, and the brave, brokenhearted parents of a gay son who last year, at the age of 17, took his own life. She told me she and her mom would be the concluding speakers and that the bishop may add a few words at the end.

I sat in stunned silence staring at her message on the glowing screen of my iPhone. I thought about all the times I’d driven to the LDS temple grounds in the towns where I’d lived for the first 30 years of my life: Rexburg, Provo, and now, Salt Lake City. I thought about sitting in the deafening silence of my car on all those nights, with only the lights around the temple breaking through the darkness. I remembered sobbing for hours at a time until my eyes were so red and swollen I couldn’t always drive myself back home. I thought about what it had meant to feel lost and alone for so many years, to be both within and without when it came to my native faith. 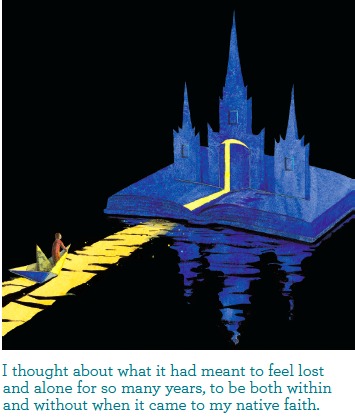 I realized that not despite, but because of that pain, I needed to be at that meeting.

A few days later, I messaged her back and said I would come. She said they would save me a place.

I opened the doors of the cultural hall to a rush of body-warmed air and saw 282 souls (I counted) seated in jam-packed rows and standing against every carpet-paneled corner of that room. As I tried to take it all in, I saw friend after friend after friend who, like me, hadn’t felt welcome inside an LDS meetinghouse in years sitting there wearing their Sunday best, listening attentively to the speakers, and at the conclusion of each one uttering in unison, “Amen.”

I could see almost every color, shape, size, race, ethnicity, orientation, and identity you could imagine—clothed in the most vibrant, creative attire—seated alongside ward members, family members, and allies eager to make space among the makeshift pews of metal folding chairs for their LGBTQ brothers and sisters. I don’t think I’ve ever seen anything more beautiful.

What if it could be like this? I thought.

What if this weren’t a once-in-my-lifetime occurrence?

What if you could expect to see this walking into every LDS meetinghouse around the world on any given Sunday?

Who may feel called back from the depths of despair into the outstretched arms of Christ’s discipleship? Who among the lost and the lonely (which is every one of us at some point) may find a place, or a friend, or a sense of purpose there? How many shattered hearts may begin to heal? How many fragile young lives could be saved?

All I know, after being in that room among the company of saints and angels that day, is we need to start asking ourselves, and each other, those questions.

And when there comes a time, like that Sunday afternoon, when there is a clear answer to some of those questions, and we feel it in the room like the gentle wings of peace taking flight in our souls, we need to start setting up folding chairs along every inch of the wooden floors of our cultural halls. And maybe, just maybe, that can lead to making room for everyone on the front rows of the soft-padded pews of our chapels, too.

So how do we get there?

We invite each other to share our stories. And then we listen. We just listen.

We gather and invite. We welcome and include. We turn down the vitriol and turn up, to full volume, the actual meaning of love. We claim each other. And we go on claiming each other, time and again, no matter what happens—for we are all part of the same body of Christ. In the words of Ruth, "Whither thou goest, I will go; and where thou lodgest, I will lodge: thy people shall be my people, and thy God my God." Zion is in the hearts of its people. And change, in any organization, starts from within. So you keep seeing me. And I keep seeing you.

The thing Mormons have always been best at is building and sustaining community, at circling the wagons: not against some perceived outside threat but around our most vulnerable. You are my people. Regardless of the labels and divisions others may try to impose on us, I will keep calling you my brothers and sisters—my family. 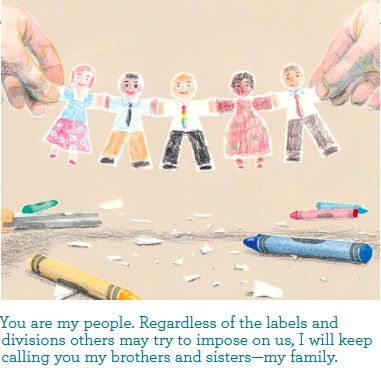 What I know is that you possess enough love to move proverbial mountains. The pioneer blood that moved our people across the plains through cold, hunger, disease, and fear of the unknown still courses through our veins and makes us who we are: a people who are proud to say we are Mormons. And being Mormon has, from its inception, meant belonging to each other as much as to God. So we turn our wagons in to love the kids sitting in the pews and the kids standing out in the foyer or waiting just outside the doors in the hallway—kids who, like me, have long questioned if they have a place there.

We let them know what we believe about the radical inclusivity of love. We show them we can be a sounding board and a safe space: that we honor and affirm them as they are, that our table is big enough for everyone to have a seat around it. That is our religion.

And it is what makes my heart swell, after all these years, to still claim you as my own.

*Editor's note: all illustrations in this article are available for purchase as prints, tote bags, or stationery cards. The illustrator is generously donating 25% of the sales to Encircle.