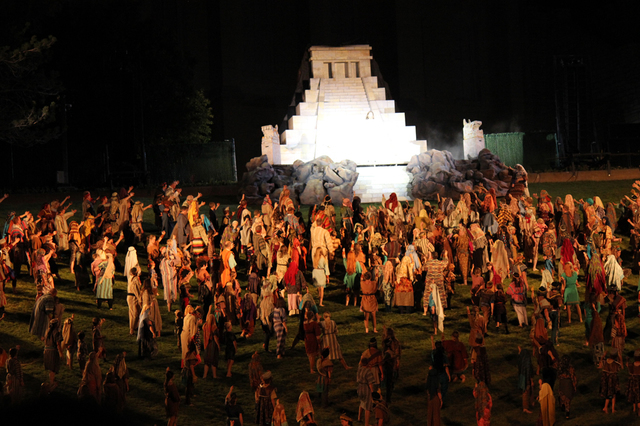 The following story originally ran on LDS Living in June 2016 but has been updated to celebrate the last year of the Mormon Miracle Pageant.

On June 22, 2019, the grounds of the Manti Utah Temple will alight and thousands will fill the temple grounds for the last performance of the Mormon Miracle Pageant.

This historic pageant, which began July 23, 1967, has been running for over half a century and has impacted the lives of more than four million attendees who have watched the program over the years, proving that the Mormon Miracle Pageant is aptly named. Not only does the pageant detail the miracles that went into the founding of Christ's Church on this earth, the pageant itself is a miracle and a compilation of creativity, charity, service, and, most of all, faith.

How else, save through miracles, could a pageant started in the 1960s with no budget turn into something that draws 70,000 to 100,000 people each year and has touched the lives of millions?

The Mormon Miracle Pageant began largely as a way to keep kids out of mischief during the long summer months. With kids wearing donated and dyed bedsheets and with lights made out of old soup cans donated by the school, the small community of Manti managed to put on a production that began drawing people from all over the nation and attracting the attention and admiration of general authorities and prophets. Here are a few miracles that went into it's creation.

The pageant, performed on the grounds of the Manti Utah Temple, is set on a historic, life-saving site. When the pioneers first arrived in Manti in November 1849, they arrived to find three feet of snow and very little protection. The Saints dug into a hillside, living out of caves and grottos that protected them from the ravaging winter winds and cold.

The hill that once saved the Saints physically soon became the site for a temple where Saints could obtain spiritual salvation, the climactic message of the pageant today.

Fun Fact: Did you know the Manti Utah Temple used to have a tunnel and archway through it that cars could drive through? People used to joke, "The Manti Temple is the only temple people can go through without a recommend."