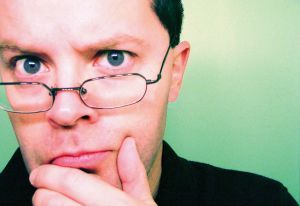 Ins and Outs of Body Language

We'll introduce you to some of the basics of body language, give you tips on how to act in social and home settings, and dispel some of the body language myths that might have you reading others the wrong way.

Body Essentials Eyes. When talking to a person in a formal setting, your eyes should be focused on the upper triangle - the base made by the eyes and the point in the middle of the forehead. Keep in mind that if someone is blinking more often than usual (six to eight blinks per minute), they might unconsciously be trying to block you or your words.

Hands. When using your hands to gesture in conversation, having your palms open and facing up is associated with truth and honesty. It is non-threatening and comes across much better than a palm down sign. As far as handshakes go, it is best to match the other person's grip.

Legs. You might have noticed your leg jigging during a particularly boring meeting. Leg jigging is considered to be the brain attempting to escape from whatever is being experienced. In addition to that, the direction in which the feet are pointing shows where you want to go. Oftentimes, you will turn your body toward someone, but if you don't really want to be with them, your feet will face the door. Depending on the situation, you can use either to your advantage.

Personal space. There are three zones that we should be aware of when we are interacting with people. The intimate zone, which ranges from 6 to 18 inches, is reserved especially for those who are emotionally close to us. The personal zone, 18 to 24 inches, is the space we need at parties and social activities. The social zone, 4 to 12 feet, is how far we naturally stand from strangers and people we don't know very well.

If you move into someone's zone where you aren't welcome, you are bound to make them feel uncomfortable. Coming into someone's intimate zone too quickly can create a bad first impression.

In the Home Knowing body language can help you communicate with your kids. If you want your kids to take out the garbage, ask with your palms facing up - people are far more likely to agree when making this hand gesture. If they continue to disobey, taking a dominant body stance (feet apart, arms folded, making yourself look as big as possible) might change their minds.

Smiling. One communication flaw parents, especially mothers, often do is smiling while disciplining. You might think that this will keep the correction from hurting your children's feelings, but if you smile at your children when chastising them for forgetting to feed the dog, they aren't going to take you seriously. MRI scans have shown that when a person is being smiled at, the brain lights up just as it would if they were receiving a reward.

Detecting a lie. The first step in checking for a lie is seeing something outside the norm. If your child usually talks with his hands in his pockets, and suddenly starts gesturing dramatically, that's a sign that you should be paying attention. People who are lying often show at least some body language alerts, like sweating, sudden movements, minor twitches of muscles, and changes in voice. If you are concerned that your child might be lying to you, confront him or her about it.

Spousal "discussions." Communicating with your spouse through body language can give you an advantage as well. If you are disagreeing about something, don't stand or sit directly in front of your spouse. Position yourself next to him or her at a diagonal angle, since being straight across from someone can seem confrontational. Tilt your head to show you are listening to the other side of the story. When it is your turn to talk, don't be stiff. Use gestures to convey your thoughts - gestures help people think more clearly and cause both parties to understand the words better.

The Social World You might feel a bit uncertain about what to do in a new ward, at a church party, or even just at a friendly gathering:

If you are coming to an event to make friends, you don't want to sit at a table with your spouse or another couple. That is saying, "This table is our space. Stay out." Instead, lean against the wall, stand by a window or an indoor plant, and make an inviting semi-circle.

Keep in mind that in a social setting, there is always someone who needs to be rescued, whether you are at a party or in Sunday School. When you see someone whose eyes are darting and they look small and uncomfortable, you might want to do them a favor and politely invite them to your conversation.