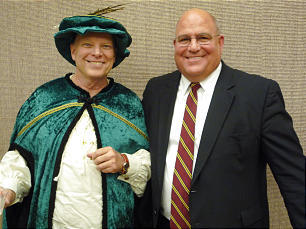 A recent Bible exhibit at Church stake centers in Oklahoma that drew more than 2,000 people resulted from a friendship that developed between a stake president and non-denominational minister on a cruise to the Panama Canal.

After much prayer, and with their children's encouragement, President Kent Bowman of the Stillwater Okahoma Stake and his wife, Laurie, took two weeks for the cruise, though it was difficult to leave his buisness and his stake presidency responsibilities.

Never did he dream that on this trip he would use his love of the scriptures to build a remarkable friendship that would benefit his life and the lives of the members of his Stake as well as the members of two other Stakes in Oklahoma.

The first night of the cruise brought President and Sister Bowman to dinner at a table with another couple selected at random, Jim and Gracie Fowler of Fallbrook, Calif. Dr. Fowler introduced himself as a retired non-denominational minister. The couples woud be at the same dining table for 14 days.