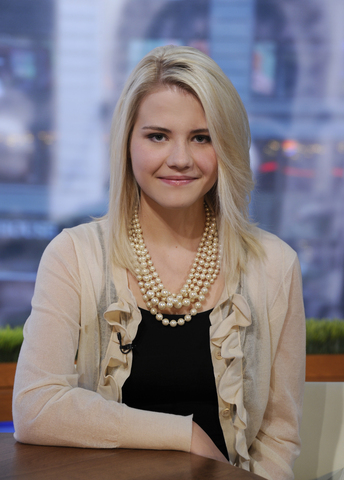 Nine years ago, Elizabeth Smart was abducted from her bedroom. After surviving a horrific nine-month ordeal, she was miraculously rescued and reunited with her family. Now the 23-year-old children’s  advocate is dedicating her life to spreading messages of hope and empowerment. And it all began in the fall of 2009 with her mission to Paris, France.

Called to Serve
“I never thought I was going to serve a mission,” Smart says. “But when my younger brother got his call, I felt a twinge of jealousy. Then one day I was sitting in church, and everything was about missionary  work. As soon as I started thinking about it, I knew I was supposed to go.”

In fact, Smart says she would have regretted it for the rest of her life if she hadn’t gone. “I realized how incredibly blessed I am and how much the gospel has made a difference in my life. It has always picked me up and helped me keep going, even in the roughest of situations. The more I thought about it, the more I thought, ‘How could I not serve a mission?’”

Within 24 hours of making her decision to go, she submitted her mission papers. She received her call three weeks later, in September of 2009. “I couldn’t have been happier with my call. I loved it. I had some incredible experiences. I made some of my best friends on my mission. Looking back, it was definitely the best decision I ever made.”

For the most part, France afforded Smart a welcomed anonymity far away from the media frenzy surrounding the criminal trial of her kidnapper, Brian David Mitchell. “The French did not know who I was, but I was still recognized by American tourists,” she recalls. “If someone said something to me, I would thank them and explain why I was there and the purpose of missionary work.”

She says France’s melting pot of cultures and religions was both intriguing and challenging. “While I love the French people and culture, at times I struggled to understand how some people could live their lives not believing in a higher power or not believing in life after death or not having a hope of ever again seeing people you’ve loved and lost. It always amazed me that people could turn away so much hope.”

The Next Mission: Protecting and Empowering Children
“My personal experiences have made me a more compassionate person in general and given me an insight into things that I wouldn’t otherwise ever comprehend,” Smart says. She is using that unique perspective to help protect children in two ways: by becoming a contributor with ABC News to bring awareness to children’s issues and cases involving missing children and by creating the Elizabeth Smart Foundation, the mission of which is to stop the victimization of children by supporting law enforcement and empowering children through education. “I’m trying to make it so no child ever has to deal with what I dealt with,” she says.

ABC News
Smart explains that part of the reason she accepted the position with ABC News is because of the role the media played in helping to bring her home. “The media is a great resource. It can be a very powerful tool for good. I felt like it was the right fit for me.”

She says that the idea to work with the media came to her while serving on her mission. “When I was out in the field contacting person after person, I started thinking, ‘The gospel is something so important to me. I wish I could reach out to more people universally.’ Then I realized, ‘Wait a second, I can. I can help a lot more people.’ When this opportunity came around, I knew it was what I wanted to do.”

Smart had been approached by several media outlets, and after considering the offers, she felt ABC News was where she would be able to make the biggest difference. “Although it’s not preaching the gospel, preventing crimes against children is something else I feel very passionate about, something very worthwhile. So when the opportunity arose, I jumped on it.”

Smart is in the early stages of her relationship with ABC News, and she says the position is a work in progress. “I don’t think either one of us is fully aware of what it could turn into, but I hope to collaborate on stories about internet crimes against children and utilize that relationship to spread awareness.”

The Elizabeth Smart Foundation
The groundwork for the Elizabeth Smart Foundation was also being laid while she was still in the field, thanks to her father, Ed. “I talked with my dad, and we decided we wanted [the foundation] to be something that would bring hope to other people while stopping the victimization at the same time. Our goal is to empower children by helping them to know their options and by supporting law enforcement in stopping crime. We also want to bring awareness to other cases and try to make a difference.”

Right now the foundation is focusing on the RAD (Resisting Aggression Defensively) Kids empowerment program—a program designed to teach children the skills to fight off potential kidnappers and abusers. “You never know what kind of situation you’re going to be put in, and you never know how you’re going to react,” Smart says. “As important as education is, as important as reading, writing, and arithmetic are, it’s not going to help you if you’re dead. I think it’s most important that children learn how to survive.”

Through her foundation, Smart is also working to protect the funding of important law enforcement programs, such as the Internet Crimes Against Children (ICAC) Task Force, a multi-jurisdictional group that assists state and local law enforcement agencies in responding to cybercrimes against children.

“There is so much turmoil in Washington with the debt crisis. So much funding is being cut, but the task force does something I don’t think anyone else can do,” Smart says. “They can locate where child pornography is being manufactured, and in one out of three cases the child is at that physical location and can be rescued at that moment. Less than two percent of cases are being investigated because they don’t have the funds, they don’t have the manpower, and they don’t have the time. Funding is huge. Even if it saves one child, wouldn’t it be worth it? People need to talk to their senators and congressmen and tell them they want their ICAC teams funded.”

Hope in the Gospel
Smart endured a horrific ordeal that few people can comprehend. Even so, she has moved forward with grace and courage, and she says forgiving her captor is largely what enabled her to do so.

“I’ve forgiven him, but that doesn’t mean I ever want to see him again,” she clarifies. “I know that justice may not ever be fully served on this earth. But I know that I have a Heavenly Father who loves me. I have no doubt that justice will be served one day, so there’s no reason for me to hold on to the hurt or anger or to dwell in the past. I trust in God that the best will come out. He is perfectly just and perfectly merciful.”

Smart also urges others who are struggling to never give up. “No matter what happens, we have a Heavenly Father who is always there and will never abandon us. There is always hope. For me, the word ‘gospel’ means hope. No matter how bad things get, that’s the one thing you can always hold on to. The gospel will never fail you. People might fail you, but the gospel won’t.”

What’s Next?
The Brigham Young University senior is headed back to school this fall to complete her bachelor’s degree in music—an endeavor that she acknowledges will be difficult because of all the other goals she has set for herself.

“In addition to receiving an education, I want to see RAD Kids go into every school across the nation,” she says. “I feel very passionately about preventing internet crimes against children, and I want to see those stopped. One day I also want to be married and have a family, but I’ll take it as it comes.”

Whether through the media, through her foundation, or within the walls of her own home, Smart is determined to serve others. “Whenever we would go somewhere, my parents would always say that we needed to leave it better than how we found it. That’s what I’d like to do with my life—to feel like I’m making a difference and making a little part of the world better because I was here.”