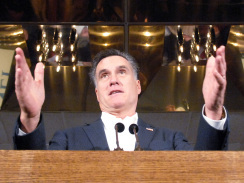 Is America ready for a Mormon President?

Mitt Romney faced down the question of whether America is ready for a Mormon President on Friday night in Hilton Head, South Carolina. During a town meeting, supporter Betty Treen took the microphone to ask the former Massachusetts Governor point blank about his faith.

"I am for you, but I need to ask you a personal question: Do you believe in the divine saving grace of Jesus Christ?" A murmur could be heard in the crowd in the few seconds it took Romney to get the microphone back.

"Yes, I do," Romney began, as the crowd erupted into applause led by home state governor Nikki Haley, who was on stage with the candidate she has endorsed.

Read the rest of this story at cbsnews.com