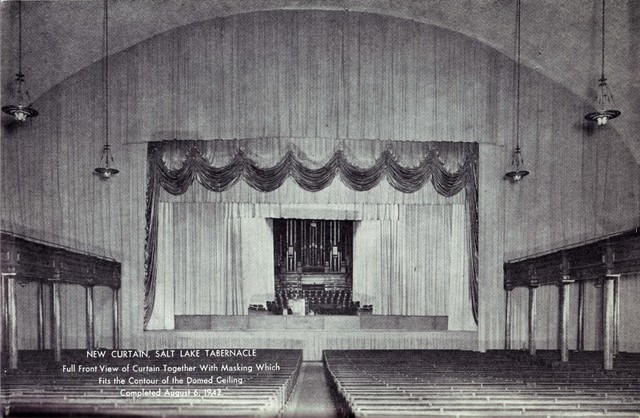 It’s Curtains for the Tabernacle

For decades, the Tabernacle on Temple Square was the largest indoor seating space in Utah. Consequently, it was used for many kinds of civic and cultural gatherings – concerts, patriotic gatherings (like the “campfires” of the Grand Army of the Republic when the 1909 national gathering was held in Salt Lake City), speeches by visiting celebrities and dignitaries. Especially after the Salt Lake Theater was torn down in 1928, the Tabernacle was the site of pageants and dramatic presentations.

Speakers could stand at the same podium used by General Conference speakers, of course. Other performers, especially group performers, could be accommodated by covering the fixed seats on the stand with movable platforms, and even extending those platforms into the space between the stand and the congregational seats. It’s a system still in place in the Tabernacle today; similarly, the space in the Conference Center can be endlessly adapted by removing or rearranging seats and by installing platforms in any dimension.