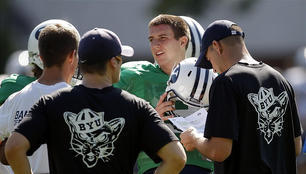 Jake Heaps is not Jimmer Fredette — at least not yet

Jimmer Fredette, the next generation, answers questions with a practiced blend of confidence and humility. You know the drill: respect everyone, fear no one.

The sky is the limit, he says, regarding goals and dreams. Predictions? He's not touching that, except to say he believes BYU has the potential to beat everyone on its schedule.

It is last month's preseason football media day for BYU, and quarterback Jake Heaps is the most sought-after interview in the house. Some are saying he will have a breakout season, the kind BYU's other famous quarterbacks produced. It's not impossible that he could have a year like Jimmer, the reigning national basketball player of the year.