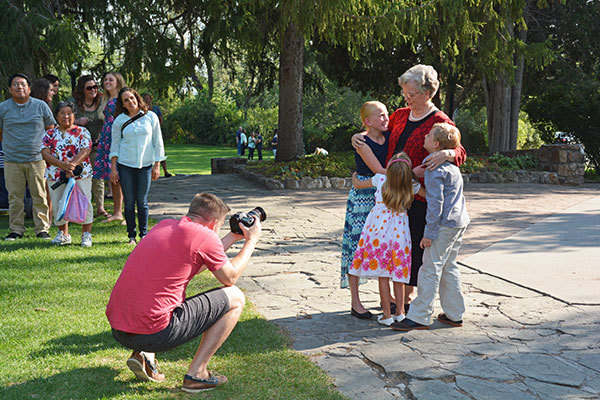 MR says: We can't wait to hear these 28 new songs! Especially after Janice Kapp Perry's song, "A Child's Prayer" came in #1 on our extensive poll to discover the Top 100 Greatest LDS Songs of All Time.

To learn more about these new songs and how Janice Kapp Perry receives the inspiration for her music, click here.

A crowd of children sit around Janice Kapp Perry as the camera rolls, but Perry doesn’t seem aware of the cameras — she is focused on the children.

“Don’t you have days when things aren’t quite going right and you say your prayers and they’re not immediately answered, so you might have a thought something like, ‘Heavenly Father, are you really there?’” Perry asked the children.

The soft-spoken woman best known for her LDS hymns had the children sing the answer back to her, “Pray, He is there. Speak, He is listening.”

The words are from her No. 1-voted LDS hymn “A Child’s Prayer” and the children who joined her are from One Voice Children’s Choir; the choir collaborated with her to record a music video for her new hymnbook,”A Songbook for LDS Families,” which will be released at the beginning of October. . . .

“A Child’s Prayer” is one of Perry’s 15 most beloved hymns included in “A Songbook for LDS Families.” The second part of the book has 28 never-before-seen Book of Mormon hymns with music composed by Perry and lyrics written by Bonnie Hart Murray.

"A Songbook for LDS Families" will be available on October 1. Keep your eye out for this incredible book at DeseretBook.com.

Her music and lyrics are timeless, her legacy limitless. Now audiences everywhere are invited to celebrate the work of musical legend Janice Kapp Perry with "A Songbook for LDS Families," a stunning illustrated compilation of many of Janice’s most moving pieces.