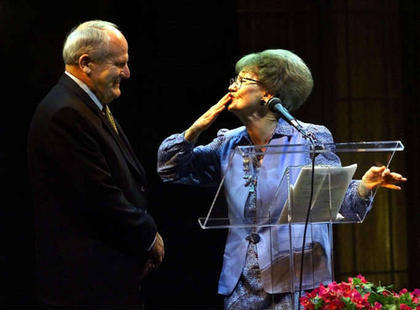 Janine "Janie" Thompson, the legendary figure behind internationally renowned performance groups such as BYU's Young Ambassadors and Living Legends, passed away June 1. She was 91.

Thompson gave up a flourishing entertainment career of her own to head BYU's entertainment program bureau in the early 1950s. She remained with the university for more than 30 years, retiring in the mid-80s.

She maintained a studio at BYU for several years after she officially retired, and continued writing music for various productions across the nation, ultimately publishing more than 100 musical works.