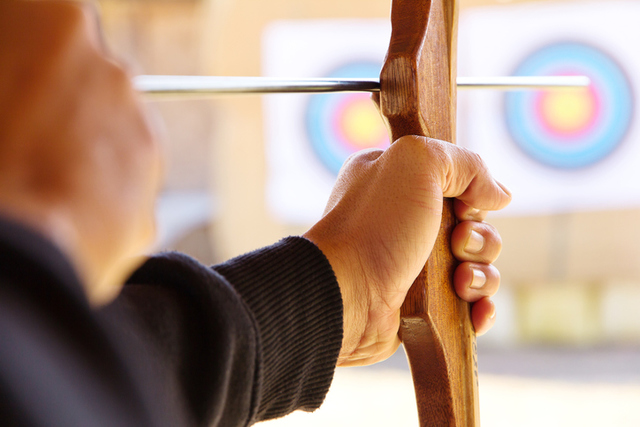 In this month's First Presidency message, President Dieter F. Uchtdorf shares an insightful analogy about archery and clarifies what the "bull's-eye" of the gospel actually is:

Recently, I watched a group of people practicing the art of archery. Just by watching, it became clear to me that if you really want to master the bow and arrow, it takes time and practice.

I don’t think you can develop a reputation for being an accomplished archer by shooting at an empty wall and then drawing targets around the arrows. You have to learn the art of finding the target and hitting the bull’s-eye.

Shooting first and drawing the target afterward may seem a little absurd, but sometimes we ourselves mirror that very behavior in other circumstances of life.

Read the full message at lds.org.

In his October 1987 conference talk, Dean L. Larsen spoke more about this concept of finding the center of the gospel and how we sometimes "miss the mark."

When I was a young man, I enjoyed participating in athletic activities of various kinds. I was never very expert in these things, but this did not diminish my interest nor the satisfaction that came from my participation. I was particularly interested in track and field events. In my school years I competed in the hurdle races as well as in the shot put and the discus throw. These last two events required that the participant launch his effort from within a ring that was marked out on the playing field. So long as the competitor remained within the ring while making his throw of the discus or the put of the shot, his effort was qualified to be measured in the competition. If he stepped outside the circle, his effort was disqualified as a foul. Generally, three preliminary attempts were permitted in each of these events, and then three more for those whose tosses were long enough to qualify them for the finals. If a competitor fouled in each of his attempts, he was out of the competition.

Those of us who participated in these sports learned the importance of staying within the mark.

I found myself reflecting on these early experiences recently as I read from the fourth chapter of Jacob in the Book of Mormon. In this part of his record, Jacob reminds us of the Israelites in ancient times who got themselves into great difficulty: “They despised the words of plainness, and killed the prophets, and sought for things that they could not understand. Wherefore, because of their blindness, which blindness came by looking beyond the mark, they must needs fall” (Jacob 4:14; italics added).

Read the entire message on lds.org.