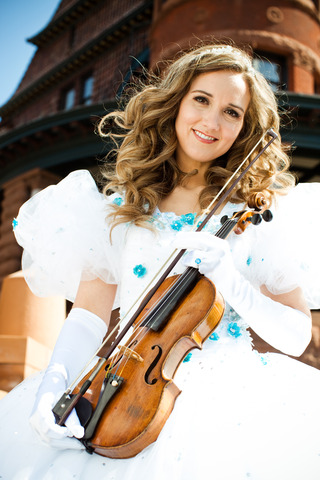 Just like any fairytale princess, Jenny Oaks Baker has worked to achieve her dreams. Although instead of spending hours every day cleaning after evil step-sisters, Baker spends hours practicing the violin; instead of dressing mice in home-made garb, she dresses each note played with passion and technique.

“Any time I’m about to go to a performance and I walk down in one of my gowns, my children gather around and get excited,” said Baker. “It’s fun, but I also have to say, ‘Oh, step back, you’ve got sticky hands.’ So it’s not like the Disney movies where it’s ‘Come around, come around’; it’s not as ideal as it is in the movies. In reality there are dirty faces and sticky hands.”

And instead of having an evil stepmother, Baker credits much of her success to her mother. Baker began playing the violin at age four and practiced every day with her mother until high school, at which point she was practicing three to four hours each day on her own. “Practicing with my mom was such a part of my development as a person as well as musically,” said Baker. Her mother guided her in more than music, praying together before and after performances, quoting scripture, and encouraging Baker to ask for blessings. “My faith was growing as my playing was developing; I’m grateful because it’s so interwoven.”

At age 18, Baker moved from Utah to Philadelphia, Pennsylvania, to attend Curtis Institute of Music. “I was so freaked out by all the people and the whole city atmosphere,” said Baker. “I was scared out of my mind and so lonely.” At Curtis, Baker began practicing six--sometimes even ten--hours a day. “I just approached it as what I was supposed to do to reach my potential and develop my talents,” said Baker. “I took advantage of the amazing opportunity the Lord had blessed me with. I’m so grateful that I worked so hard. I worked hard my whole life, but I worked my tail off my four years at Curtis.”

Later, at Julliard, Baker continued her rigorous schedule, but other things were now taking more attention. Before Baker moved to work on her master’s of music at The Julliard School in New York City, her mother was diagnosed with cancer.

At Baker’s first Sunday at the Manhattan Singles Ward, she was put in charge of handing out programs before the meeting began. It was then that she first met her prince charming. “Our eyes met and he got out of his seat to get a program, which I thought was a great sign,” said Baker. “I was determined to go sit by him. In order to sit by Matt, I had to climb over one guy, over Matt, and sit straight in the middle of the bench. I’m not very subtle.”  Baker found out he was job searching for after he graduated. “He wanted to affirm that he was from a good Mormon family with upstanding parents, so he was telling me ‘My dad has been a bishop, stake president, and right now he’s a mission president.’ He just looked so proud of himself. And even though I never do this--I never do this--I said, ‘Well, my dad is an apostle.’ That was the beginning of the relationship.”

That Sunday, Baker and her family were fasting for her mom. “When my mom found out that she had cancer, she immediately began praying that I would find someone to marry,” said Baker, who was the youngest and only unmarried child in the family. “Even though our prayers that day weren’t answered, hers were. Losing my mom was so difficult--it still is--but having me go away to school so that the apron strings were a little loosened, and then having me meet my future husband and get married while she was still alive [helped]. God just worked miracles. Matt was only there that one Sunday and I just happened to sit by him. It is a fairy tale, but it’s definitely got the Lord’s hand in it. . . . I’m so grateful that Heavenly Father blessed me with a husband at the time I lost my mom; I would have been so lost.”

Now, Baker often includes her young daughters in performances when she is able. “I try to do the same thing [my mother did for me] with my own children and it’s tough! It makes me so grateful for my own mom for taking that time with me.” It’s worth it, though, she affirms. “Family. It’s all about family,” said Baker. “I love to be with my family, my children, my husband.”

And through all those experiences, she has been prepared for the great things that are now coming her way, like her recent Grammy nomination. “I always knew growing up that the Lord had something in store for me, and I knew it was there and I had to work my hardest to be prepared to receive it and find it and go after it.” Even with such a great accomplishment, though, not much has changed. “I’ve had experiences where I started to be a little too diva-ish and Heavenly Father immediately nudged me back and reminded me of who I am and what I represent and the purpose of my gift,” said Baker. “I am truly grateful that Heavenly Father loves me enough to remind me who I am.”