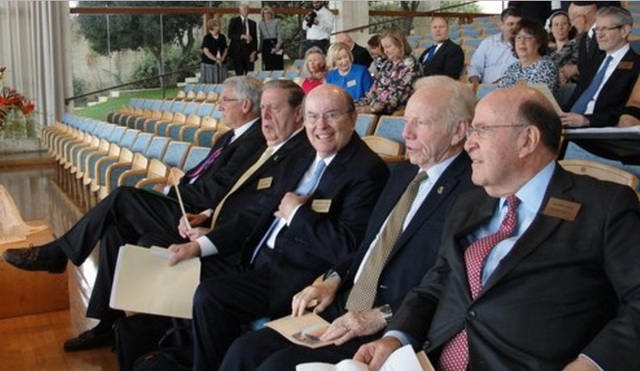 “Each has a fundamental focus on family,” New York Attorney General Bob Abrams shared after Elder Jeffrey R. Holland shared beliefs Mormons and Jews share. “Each places a very high value on education. Each has a strong commitment to charitable giving. Each demonstrates humanitarian concern and response when there are international catastrophes around the globe. Each has a history of disproportionate success due to ability, hard work and determination. And each has been subjected to fierce persecution and prejudice.”

The following was published on Jewish News Service:

Exactly 175 years ago, an American non-Jew, under the direction of the founder of his church, climbed the Mount of Olives and offered an impassioned declaration and prayer proclaiming the Holy Land as the gathering place for the Jewish people.

This week, that act by Orson Hyde, an Elder of The Church of Jesus Christ of Latter-day Saints, was commemorated in Jerusalem by a joint delegation of prominent American Jewish and Mormon leaders. They gathered to mark a new phase in strengthening ties and cooperation between the Jewish and LDS communities.

► You may have missed: Elder Holland Tells Prominent Jewish Leaders About When Elijah Returned to an LDS Temple

The idea for the commemoration, and the visit to Israel by leaders from both faiths, grew out of a friendship between two lawyers who met in New York City in 2003: former New York Attorney General Bob Abrams, a veteran Jewish community activist, and Elder James J. Hamula, of the Seventy, a leader of the Church.

In 2008, he invited Abrams and several other Jewish leaders to visit Church headquarters in Salt Lake City.

In the months preceding that visit, Abrams had lengthy, sensitive negotiations with Church officials, which led to a commitment to cease the proxy baptisms of Jewish Holocaust victims that had outraged many in the Jewish community.

Read the rest of this story at www.jewishaz.com