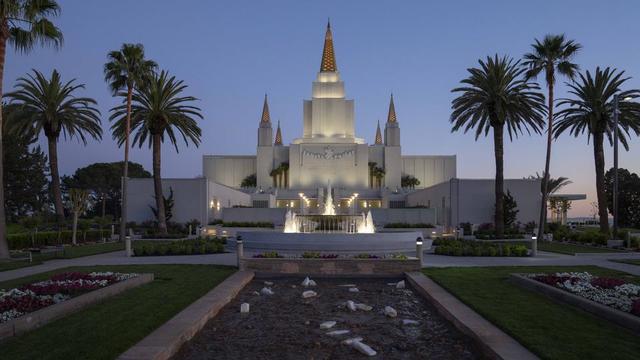 Jewish Reporter Describes "Exciting" Experience in the Oakland Temple, Compares It to Ancient Temples in Jerusalem

With renovations complete for the Oakland California Temple, this temple is open to the public for a limited time—from May 11 to June 1. The opportunity to enter the building typically restricted for those outside our faith prompted a press event which included Jewish journalist David A.M. Wilensky, among others. As part of the event, the group of journalists took a tour of the temple before its upcoming re-dedication on June 16.

In an article about his experience published in the Jewish News of Northern California, Wilensky wrote, "The temple is monumental — if you’ve ever wondered at night about those dramatically lit spires in the hills above Oakland, now is your chance to see the temple from the inside. This is the first time it’s been open to the public in 55 years. If you’re a fan of architecture or if you’re interested in religions, a visit is a must."

Wilensky's tour was directed by none other than Elder Gary E. Stevenson. "As a nonmember, to enter a temple with an apostle as a tour guide is a once-in-a-lifetime opportunity," he wrote.

Throughout his article, Wilensky continually compared the Oakland California Temple and temple ordinances to the ancient temples in Jerusalem. "The temple grounds are surrounded by a fence, analogous to the outer wall of the First and Second Temples in Jerusalem; the space inside the gate is analogous to the outer court of the Temple, which anyone could enter. Likewise, any member of the public can enter the gates of the Oakland Temple grounds at any time (in this case, to enjoy the garden or take in the sweeping views)."

"At the Temple in Jerusalem, the inner court (or Priests’ Court) could be entered only by Kohanim, members of the priesthood descended from Aaron. Similarly, here only church members can enter. . . . Driving home the symbolism of the Temples in Jerusalem, the first painting visible upon entrance shows worshippers bringing Temple offerings (bulls, sheaves of wheat, etc.) to Jesus."

During his walk-through, Wilensky was particularly impressed with the temple's baptismal font:

"The baptismal font is perhaps the most magnificent part of the Oakland Temple. It looks like an unusually deep hot tub. Typical in LDS temples, the font rests upon 12 life-size faux-bronze bulls.

"While describing proxy baptism and other rituals, our guides repeatedly emphasized that temples and temple ordinances are 'sacred, not secret.' This is to counter the public perception of the church as secretive."

Wilensky also described his visit to the celestial room, writing, "In the Oakland Temple, the high-ceilinged celestial room features couches and chairs, like a gilded sitting room. Here the faithful can sit in reverent silence, meditating or praying. Before we entered, Stevenson framed the experience for us, inviting all of us to 'contemplate our relationship with our creator.'"

Wilensky was duly impressed by the experience and with the sacred place, even as a member of a different faith:

"There is so much more to say about this magnificent structure. As a Jew, I experienced an exciting sense of standing within the grand sweep of history. Over centuries, the layout of the portable tent in the desert inspired a succession of ever more grandiose temples in Jerusalem — and, finally, 200 temples of the Church of Jesus Christ of Latter-day Saints across the world. A holy tent in the desert echoes across history. It’s really something."