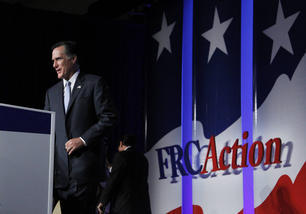 Jews view Mormons favorably; what it means for Mitt Romney

Should Mitt Romney win the Republican presidential nomination, it is unlikely his membership in The Church of Jesus Christ of Latter-day Saints will be as big an issue in the general election as it has been in the Republican primary campaign.

That's the opinion of authors and researchers David E. Campbell and Robert D. Putnam, who wrote in the Wall Street Journal that a survey they have conducted about the feelings of Americans toward different religious groups suggests that "a Mormon politician like Mitt Romney may not face an impenetrable stained-glass ceiling after all."

Campbell, an associate professor of political science at the University of Notre Dame, and Putnam, a professor of public policy at Harvard, co-authored "American Grace: How Religion Divides and Unites Us." They explained in the Journal that although Latter-day Saints generally scored low on their survey, "Mormons aren't viewed negatively by everyone, and the religious group that gives them the highest rating of all may come as a surprise: Jews."