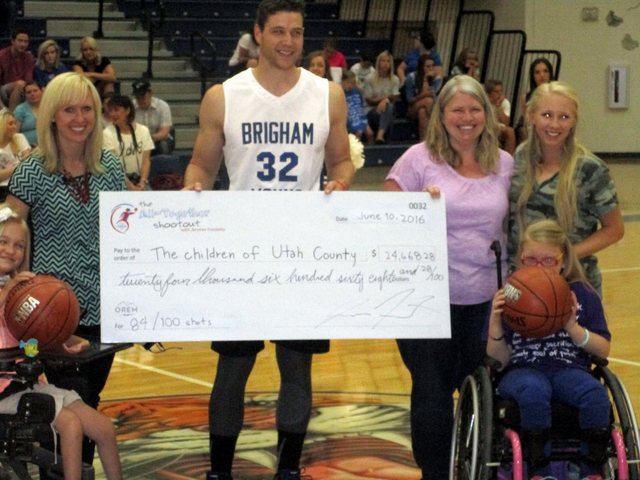 It's been a few years since Jimmer Fredette rocked the college basketball world back on its heels, but on Friday night, the sharpshooting guard proved he still has it.

Taking a hundred three-pointers for charity in front of a packed house at Orem High School, the former BYU Cougar star sunk an incredible 84. Fredette's deadly accuracy raised $24,668, which will go towards building a new playground for children in Utah Valley.

The incredible shooting display was part of an event for Fredette's charity, Jimmerosity, which works with the Fredette Family Foundation to stop bullying in schools around Utah County. Many activities were held in conjunction with the event, including a 3-on-3 tournament and a meet-and-greet with the Jimmer himself.

Fredette made waves as a college basketball star at Brigham Young University, where he was the unanimous College Player of the Year. His distinctive style of play—especially his ability to sink three-pointers from several feet behind the line—took the sports world by storm, and not only did Jimmer become a household name, it became a verb. Though Fredette's NBA career has been rocky, he's attained success in the NBA's developmental league, winning All-Star Game MVP honors and solidifying himself as the best scorer in the league.