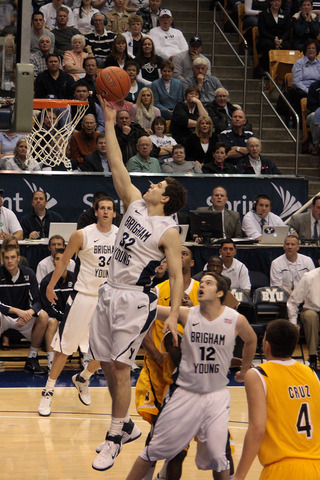 In 23 days, Jimmer Fredette will know which team he will play for in the NBA. The draft will be held on June 23, but there have already been plenty of predictions from top basketball analysts.

Fredette played four years for the BYU’s men’s basketball team. He finished his BYU career with a notable 2010–2011 season, leading his team to the sweet sixteen in the NCAA tournament. His astonishing three-point range and his overall scoring power impressed everyone from fans to experts to Barack Obama. Fredette earned National Player of the Year honors in 2011, and next year, this college basketball dynamo will test his abilities in the NBA.

With so much praise for Fredette, it might seem like he is the obvious choice for the No. 1 draft pick, but experts are not predicting he will be picked in that slot. What type of player a team needs contributes a lot to which player they choose. Not every team is searching for a high-scoring point guard like Fredette. Also, some analysts still wonder whether Fredette’s playing style will be as powerful for him in the NBA as it was at BYU. Possible weaknesses of Fredette include his defensive abilities and his turnover rate.

There’s no question that Fredette will be drafted. The question is where. Which team has the right fit he is hoping for?

Two prospects could put Fredette playing for a team in a place where he has roots. Several basketball analysts have suggested he will end up playing for the Utah Jazz. The Jazz have two early picks in the draft, No. 3 and 12. Experts are predicting that if the Jazz do choose Fredette, they will do so in the number 12 slot. BYU students and fans would likely cheer the prospect of having him play professionally fewer than fifty miles from his alma mater.

But Fredette is not a Utah native. He hails from the town of Glens Falls, N.Y. The home team for the state of New York, the Knicks, has the 17th draft pick. If he has not been drafted before No. 17, there is a possibility that Fredette could play for the New York Knicks.

Whichever team selects him on June 23, Fredette will no doubt be BYU’s next drafted basketball player. Until then, the National Player of the Year and his fans will just have to wait.