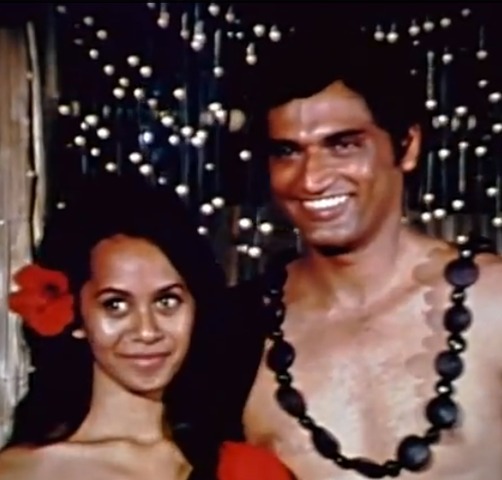 Thanks to the movie Johnny Lingo, being called an eight-cow wife is now a compliment. This 1969 film has lived on in Mormon culture through the decades, and not surprisingly, seminary teachers and Young Men and Young Women leaders still show it to their youth. Johnny Lingo has been shown in various denominations throughout the world, not just in LDS churches in the United States.

In the film, Johnny Lingo’s village scorns Mahana, Moki’s ugly daughter, because she looks as if she “has a face like a stone.” But when Johnny Lingo pays eight cows for her hand in marriage, her confidence soars and her ugly-duckling feathers fall away to reveal a beautiful young woman. Lingo confesses that he gave eight cows for Mahana because he always loved her and wanted her to believe in herself. “Many things can happen to make a woman beautiful. But what matters most is what she thinks of herself,” Johnny says.

“I think that’s the underlying message that the film stresses,” says Naomi Wilson, who played the role of Mahana. “That’s such a simple message that seems to resonate with people of different cultures. I think that’s the most surprising dimension of this whole experience: the cross-cultural application of the message. I never had a clue that it would be a factor 42 years later.”

When Hawaii native Naomi Kahoilua Wilson was cast as Mahana, she had no idea that this small role would stay with her for the rest of her life. “I don’t think I understood or appreciated what I was experiencing at the time,” says Wilson. “I didn’t really understand what the Lord was trying to make of us.”

Naomi Wilson and her daughter.

In 1970, she married Brent Wilson and soon after moved to Spokane, Washington. She and her husband are the parents of three children. As a proficient pianist, she teaches classical piano to advanced students and annually gives firesides about Mahana and the importance of believing in oneself. “Mahana has almost become like a shadow sister,” says Wilson. “When I show up for these assignments, no one wants to meet Sister Wilson at first; they will call me Sister Mahana.”

Makee K. Blaisdell grew up in Hawaii and graduated from Brigham Young University, but he quickly entered the world of television in California. He played small roles on many television series throughout the ’60s and ’70s, series like Daniel Boone, Iron Horse, and Star Trek. It is rumored that Blaisdell would have replaced Leonard Nimoy as Spock should Nimoy have left Star Trek after its second  season. But he is most notably known for his role as Johnny Lingo. Blaisdell passed away in 1988 in Ventura, California, at age 56.

Francis L. Urry was already a staple name in the world of LDS entertainment in the ’60s when he was cast as the tradesman on Johnny Lingo’s island. He worked with KSL radio and television in Salt Lake City and was often one of the few professionally trained actors on the set of Church films. Before Johnny Lingo, Urry played the role of President Lorenzo Snow in the Church film Windows of Heaven. He was highly praised for his excellent portrayal of the prophet since he was considerably younger than President Snow. Urry passed away in 1985 in Salt Lake City, Utah.

Joseph W. Ah Quin has long been a musical legend in Laie, Hawaii. Even though the character of Mahana’s father, Moki, is greedy and unloving, Ah Quin has shown his great love for the people of Hawaii through his voice. He has even sung at the Metropolitan Opera in New York City. Recently, he has been involved with the internationally known Ko'olauloa Childrens Chorus choir in Hawaii.

Watch the entire feature of Johnny Lingo on the Mormon Channel.