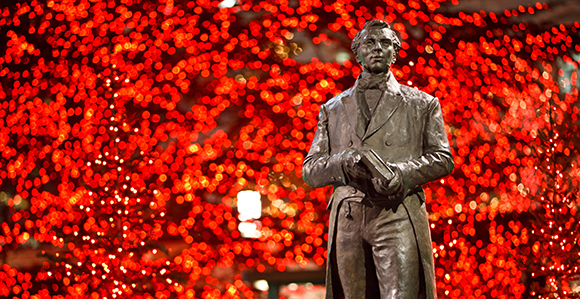 Joseph Smith: The Most Transcendent & Far-Reaching Life Since Our Savior's

As Latter-day Saints commemorate the Savior’s birth, we remember also one who bore powerful witness of the Christ child born in the little town of Bethlehem. On December 23, 1805, Joseph Smith Jr. was born in an obscure village in Vermont’s Windsor County.

“Though the world didn't know it at the time, this 19th-century birth would initiate what is arguably the greatest and most far-reaching chain of events in the history of Christianity since the Savior's mortal ministry itself.

“That infant would grow up to hold the apostolic office and thus be a special witness of Jesus Christ, the first mortal man on earth with such authority since the deaths of Peter, Paul, and other New Testament figures. But Joseph's role would have further significance, he being the man who, under the direction of Jesus Christ, received the keys of the gospel's restoration in latter days and of the prophesied dispensation of the fulness of times. It was a role with transcendent magnitude, fulfilling scriptural prophecy” (R. Scott Lloyd, Church News, Dec. 18, 2010).

On December 23, 2005, President Gordon B. Hinckley delivered from the Church’s visitors’ center at Sharon, Vermont, an address that was transmitted to the Conference Center in Salt Lake City and meetinghouses worldwide.