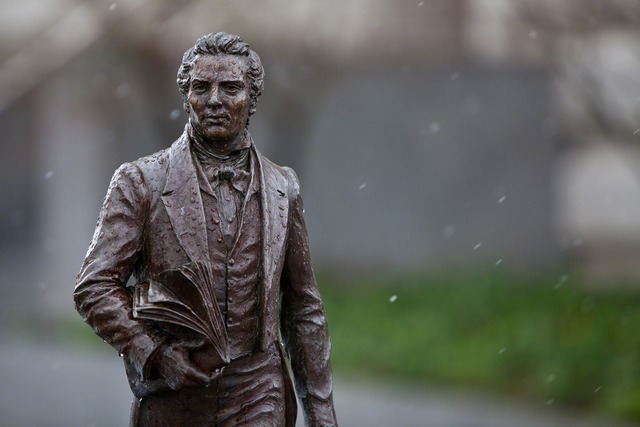 As The Joseph Smith Papers, Documents, Volume 5: October 1835–January 1838 editor Christian Heimburger says, it was not uncommon in the days of the early Church for men to resolve their conflicts with physical blows. But on December 16, 1835, a particular physical confrontation resulted in the members of the Twelve Apostles to hold a special council for one of the men involved, while the other was left unable to "sit down or rise up without help," according to the new Joseph Smith Papers volume.

"This particular fight was, perhaps, slightly unusual in that one of the men was a member of the Quorum of the Twelve Apostles and the other was revered by many as a prophet of God," Heimburger says.

According to the new volume, this fight between Joseph Smith and his younger brother William Smith was a culmination of disagreements that began in the fall of 1835. Prior to this, Joseph Smith noted in his journal in 1833 that his younger brother was like a "fierce lion” who “in the pride of his heart . . . will neglect the more weighty matters until his soul is bowed down in sorrow.”

In fact, his concern over William's spiritual welfare contributed to his decision to call William as an apostle, as David Whitmer recalled Joseph Smith saying "it was the only way which he [William] could be saved," according to the volume.

And in October 1835, two days after a heated disagreement between the two, William made a visit to Joseph. According to the volume, the visit escalated to the point where William declaring he wanted nothing more to do with the Church and, as Joseph Smith recorded, "we might take his license for he would have nothing to do with us."

Though William did not leave the Twelve and stayed a member of the Church, the tensions remained.

Then, after attending a session of the debating school in Kirtland, Joseph Smith and William became involved in an argument about whether or not the school should continue.

Despite Joseph Smith Sr.'s attempts to end the argument, the dispute escalated until William attacked Joseph Smith before he even finished removing his jacket.

Though the volume says the exact nature of the fight was unclear, it does confirm that several men were involved, including Jared Carter, a member of the Kirtland high council. As a result of the fight, Joseph was left "bruised and wounded," unable to "sit down or rise up without help," and “grieved beyond expr[e]ssion, at the wickedness of his brother, who Cain like had sought to kill him,” according to the volume.

The Kirtland community took William's attack on Joseph Smith, who was prophet at the time, very seriously, and William was called before the Quorum of the Twelve for a council meeting to take responsibility for his actions.

The following day, William wrote a letter to Joseph saying:

"I feel sorry for what I have done and humbly ask your forgiveness—I have not confidence as yet to come and see you for I feel ashamed of what I have done, and as I feel now I feel as though all the confessions that I could make verbally or by writing would not be sufficient to atone for the transgression . . .(The Joseph Smith Papers, Documents, Volume 5: October 1835–January 1838, 113). "

". . . do not cast me off for what I have done but strive to save me in the church as a member I do repeat repent of what I have done to you and ask your forgiveness— I concider [sic] the transgression the other evening of no small magnitude . . . (The Joseph Smith Papers, Documents, Volume 5: October 1835–January 1838, 114).

Joseph Smith did not hold a grudge against his brother. In fact, in the letter, Joseph Smith frankly forgave William, saying, "In your letter you asked my forgivness [sic], which I readily grant . . ."

"You desire to remain in the church, but forsake your apostleship, this is a stratigem [sic] of the evil one, when he has gained one advantage, your he lays a plan for another, by 〈but〉 by maintaining your apostleship in rising up, and making one tremendeous [sic] effort, you may overcome your passions, and please God and by forsaking your apostleship, is not to be willing, to make that sacrafice [sic] that God requires at your hands and is to incur his displeasure, and without pleasing God do not think, that it will be any better for you, when a man falls one step he must regain that step again, or fall another, he has still more to gain, or eventually all is lost (The Joseph Smith Papers, Documents, Volume 5: October 1835–January 1838, 121)."

In the letter, Joseph Smith shows a pattern of reprove and counsel for his brother, something that Joseph Smith wanted for priesthood leaders to practice with those under their stewardship. And, according to the volume, this became something he implemented later in his life.

And through this two letters, members are able to glimpse more of Joseph Smith's life. Though he was emotionally and physically injured by his brother's actions, he forgave him and continued to be concerned about his spiritual welfare despite repeated injury, something everyone can learn from.

Perhaps no volume of the Joseph Smith Papers conveys the highs and lows of Joseph Smith's life better than Documents, Volume 5. Through letters, revelations, and meeting minutes—as well as more unusual documents such as a map, an essay on abolition, and a study of the Egyptian language—this volume brings to life the consequential and often emotionally charged months from October 1835 to January 1838.