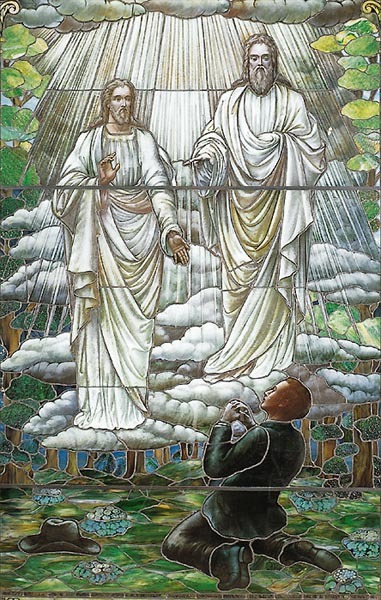 In researching my new biography of Joseph Smith, I found that those who struggle with their faith need to be patient and not feel guilty that their faith is not strong yet like others.

Those who knew and loved the Prophet witnessed several times when he struggled with his own faith:

At one point in his youth, he even doubted there was a god, according to his friend Oliver Cowdery. Yet, after those doubts, Joseph would grow in faith, believe the Bible, and put it to the test and pray. The result was the First Vision when he saw God the Father and his Son Jesus Christ, conversed with angels, and received the Book of Mormon to translate with Oliver as scribe.

If the Prophet of the Restoration could start at ground zero in the faith department, maybe our loved ones can, too. They might just come around.

Before the First Vision, Joseph wanted to experience religion like “his mother, his sister, and his brother hard,” according to an acquaintance, Alexander Neibaur, “but could feel nothing.” The incident was uncovered during my research.

In time, look what he became.

Bottom line: Don't give up on loved ones; they might surprise us. Joseph no doubt surprised a few of his friends and family along the way, too.

Eventually the answers came for him, and look what he became: a prophet! But in his early years he struggled, not having a lot of faith. If a person of little faith becomes the powerful prophet he would become, so can we grow in our faith--anyone can.

Learn more about the life of the Prophet in Joseph Smith and the Latter-day Saints, Vol. 1

Best-selling author of Porter Rockwell: A Biography and Hubener vs. Hitler, has produced the most complete portrait so far of the Mormon prophet. Written for the everyday reader, this robust biography unfolds like fast-paced fiction—yet is a true biography.

Eleven years in the making, Dewey's book captures Joseph's tumultuous life story, backing it up all the way with thousands of facts—many not widely known even among Latter-day Saints. He quotes numerous journals and letters of neighbors on the farms and villages who actually knew Joseph Smith. And he characterizes the fascinating relationships Joseph had with friends and enemies alike, as we get to know Joseph on a personal level.

Written from the viewpoint of a believer, this book tackles the controversies head-on, with the pro and anti-sources analyzed. This meticulously researched first volume of a three-volume series covers the first 25 years of Joseph's 38-year life, a journey that is without parallel in religious and world history.

-->Get the most in-depth volume on Joseph Smith's life avaialble