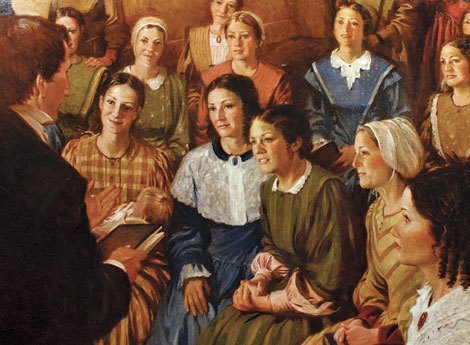 [One] aspect of Joseph Smith’s teachings to the Relief Society that may be unfamiliar today is his endorsement of women’s participation in giving blessings of healing. “Respecting the female laying on hands,” the Nauvoo Relief Society minutes record, Joseph said that “it is no sin for any body to do it that has faith,” and admonished, “if the sisters should have faith to heal the sick, let all hold their tongues, and let every thing roll on.”30 Some women had performed such blessings since the early days of the Church. At that time, Latter-day Saints understood the gift of healing primarily in terms of the New Testament’s teaching that it was one of the gifts of the Spirit available to believers through faith. Joseph Smith taught that the gift of healing was a sign that would follow “all that believe whether male or female.”31

During the 19th century, women frequently blessed the sick by the prayer of faith, and many women received priesthood blessings promising that they would have the gift of healing.32 “I have seen many demonstrations of the power and blessing of God through the administration of the sisters,” testified Elizabeth Ann Smith Whitney, who was, by her own account, blessed by Joseph Smith to exercise this gift.33 In reference to these healing blessings, Relief Society general president Eliza R. Snow explained in 1883, “Women can administer in the name of JESUS, but not by virtue of the Priesthood.”34 . . .

► You'll also like: Mormon Women Giving Blessings: Everything You Need to Know

Joseph Smith said that his instructions to the Relief Society were intended to prepare women to “come in possession of the privileges & blessings & gifts of the priesthood.” This would be accomplished through the ordinances of the temple.38 These new ordinances taught the nature of God, the purpose of life, the meaning of eternal life, and the nature of humankind’s relationship to divinity. They brought men and women into a covenant relationship with God. . . .

In the last two years of his life, Joseph Smith introduced temple ordinances and covenants to a core group of men and women. In May 1842, he officiated in the first temple endowments—a ritual in which participants made sacred covenants and received instruction regarding God’s plan of salvation.41 Joseph Smith began sealing (or marrying for eternity) husbands and wives and then initiated women into the endowment by the end of September 1843. He taught men and women that by receiving temple ordinances, culminating in the sealing ordinance, they entered into an “order of the priesthood.”42 By the time of his death, he had given these ordinances to several dozen men and women, who met together often to pray and to participate in temple ceremonies as they awaited completion of the Nauvoo Temple in December 1845.

Temple ordinances were priesthood ordinances, but they did not bestow ecclesiastical office on men or women. They fulfilled the Lord’s promise that his people—women and men—would be “endowed with power from on high.”43 That priesthood power was manifest in individuals’ lives in many ways and was available to adult members, regardless of marital status. The endowment opened channels of personal revelation to both women and men. It bestowed a greater measure of “faith and knowledge” and the “help of the Spirit of the Lord”—power that fortified the Saints for subsequent hardships they would face as they traveled 1,300 miles across a forbidding wilderness and settled in the Salt Lake Valley.44 . . .

During the Nauvoo era, Latter-day Saints came to understand that all people are children of heavenly parents and that it is the ultimate destiny of faithful men and women to become like them.47 Additional revelation about the eternal nature and purpose of marriage accompanied these teachings. Joseph Smith taught associates that marriage performed and solemnized—or “sealed”—by proper authority in temples would last into the eternities.48

These revelations and ordinances imparted new understanding of the interdependent relationship of women and men. As Bishop Newel K. Whitney expressed it shortly after receiving his endowment, “Without the female all things cannot be restor’d to the earth. It takes all to restore the Priesthood.”49 Mary Isabella Horne, a member of the Nauvoo Relief Society, later expressed joy in being “co-laborers with our brethren in building up the kingdom of God.” “In all the ordinances received in the House of the Lord,” she said, “woman stands beside the man, both for the living and the dead, showing that the man is not without the woman nor the woman without the man in the Lord.”50