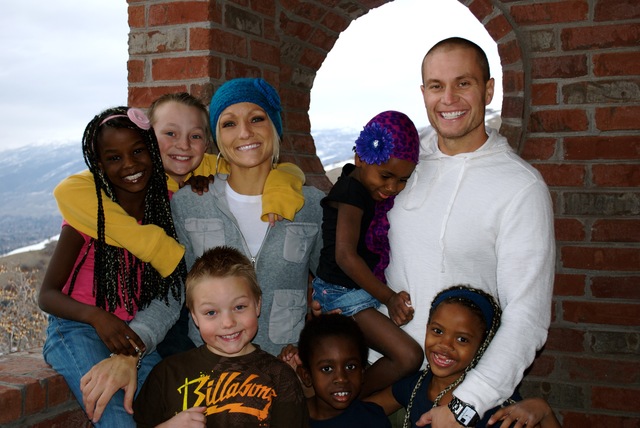 Journey for a Lifetime

Jeremy and Hollie Wardle had already started their family journey with two beautiful boys when it took an unexpected detour. For the second time, they lost a son after premature birth. Inconsolable, they wondered what the future held.

But on their way home from the hospital after losing their son, they felt prompted to call their friends, the Kehls, who had also lost children and had chosen to adopt. In a discussion with the Kehls that evening, Hollie and Jeremy suddenly realized the Kehls were meant to help them find a little girl. Within minutes, Ed Kehl was phoning his aunt who ran an adoption agency. It turned out she had a newborn child in Philadelphia--a little girl--who was ready to be adopted.

Just seven days later, their daughter Brooklyn was safe inside their home.

Unexpected Joy Out of the tragedy of death, the Wardles were led to their first daughter. It would become a pattern for their family--each addition has led to the blessing of another. "Each one of our children has played a specific role," says Jeremy.

The adoption of one child led them to consider adopting more. So, four years later, after choice experiences, they were led to adopt two siblings, Robens and Nyah, from Haiti. They thought this adoption would add the last of their children to the family. But on their first visit to Robens and Nyah at the Crèche Enfant Jesus in Haiti, they saw another little girl, Gabrielle, who consumed their thoughts long after the visit. "I just knew she was supposed to be with us," says Hollie.

With odds stacked against them, the Wardles completed Gabbie's adoption one year after Robens and Nyah joined them. And on January 11, 2010, Gabbie was cleared to be with them in two weeks.

Something Bigger The next day, January 12, Haiti was hit with a catastrophic earthquake. It was two days before Gina Duncan, who runs the orphanage just miles from Port-au-Prince, confirmed the safety of Gabbie and everyone in the Crèche. But, she explained, they only had enough food to last two days. Gina asked the Wardles for help. And so this child had led them to an even larger "family." "We always felt like Gabbie was coming home," says Hollie. "But I just kept saying to [Jeremy], 'This is so much bigger than I think you or I can imagine.' Even though Gabbie is our priority, they're our priority, too."

It soon became obvious that the only way to get Gabbie and help the Crèche was for Jeremy to go down to Haiti himself. Bolstered by family and friends--who offered everything from SkyMiles to priesthood blessings--Jeremy departed for the Dominican Republic, planning to get over to neighboring Haiti and help the Crèche, but without any idea how.

Miraculously, everything would fall into place. When he arrived, Jeremy had little more than some food and a cell phone--his lifeline back to Hollie, who would periodically let him know about "angels" who stepped in to help them at just the right moments.

Jeremy would meet the people most instrumental in his trip's success within one day of arriving--twelve men who would get Jeremy and the aid to the Crèche. These men were with Utah Haiti Relief (UHR), an all-volunteer organization has funded the transport of thousands of pounds of aid throughout Haiti.

Jeremy, it turned out, was also able to help them. While other UHR volunteers were already serving elsewhere in Haiti, these twelve men had been directed to Jimaní without a specific idea of what to do. But after hearing about the orphanage and its dire need, these men told Jeremy that he had helped them find their mission: to get aid to the orphans in the Crèche and, afterward, work with Jeremy to find more orphans they could help.

So it was on Monday, January 18, that aid finally made it to the Crèche. As Jeremy and the other men helicoptered over the orphanage, "the aunties that had taken care of the children came running out, their hands were in the air, and they were jumping and clapping," remembers Jeremy. They had made it in the nick of time--sadly, one baby had already died.

Once on the ground, Jeremy found Gabbie and said, "I'm not going to leave without you this time. I promise." But even after helping to attain aid and getting to his little girl, Jeremy felt something larger was yet to be done.

Evacuation For three days Jeremy and some of the volunteers stayed at the orphanage, accepting new loads of aid each day, until Thursday morning when Gina returned from a seventy-two-hour stint at the U.S. embassy--eighteen visas in hand for some of her orphans to get to their adoptive families. She then asked Jeremy if he could arrange for the orphans to fly out with him. He turned to C.J. Wade, one of the UHR volunteers making it all possible, who replied with a smile, "Heck yeah!"

So, in the Wardle's Utah home, Hollie implemented a country-wide phone tree--asking contacts in Chicago, Arizona, and Miami to help arrange for a jet to take the group from Port-au-Prince to Fort Lauderdale, Florida. Within hours, they miraculously had the money and the plane. "Things facilitated themselves," says Hollie, who is amazed at how everything came together. "When you're prompted, you act, and great things happen because of it."

Back in Haiti, Jeremy witnessed some tender moments before departure. The orphanage caretakers--the aunties--took their last moments with the children to lovingly dress them in their best clothes and prepare them to meet their new families. Finally, it was time to go. "We were lifting off and I looked at Gabbie--she just had tears streaming down her face and she was blowing kisses to those aunties who had taken care of her since she was two-and-a-half years old. It was so precious. So happy, but so bittersweet." In the end, Jeremy was able to bring Gabbie home on Brooklyn's birthday--six years after their original detour started.

"It's not just about the struggle of getting Gabbie," says Jeremy. "In all that experience, it's just neat how none of us had an objective--it was great teamwork. Just how many families were completed from this. It all starts with a seed. Me going in to get Gabbie was the seed that was planted to get it all going."

The entire experience is a reminder of the phrase inscribed on the only possession Gabbie was able to take from the orphanage--a picture frame holding a photo of Jeremy, Gabbie, and Hollie. A frame the Wardles gave her long before their recent life-changing experiences, which says, "With God all things are possible."

Want to help? Visit UHR's website, utahhaitirelief.org, where you can help the organization reach places outside Port-au-Prince's main humanitarian efforts.