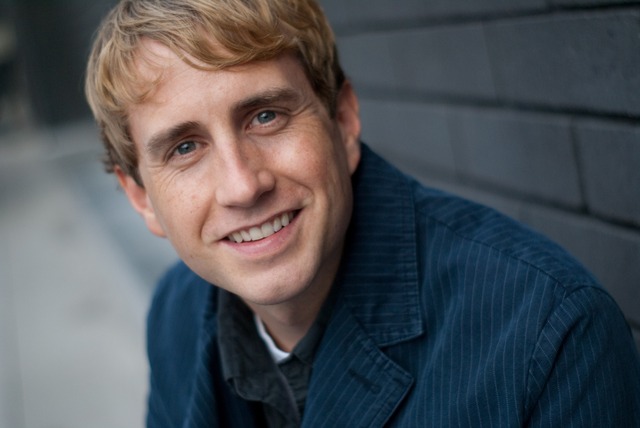 *Editor's note: This is the full interview with Kirby Heyborne, with extra questions not seen in the print version of our January/February 2011 issue!

Do you have any crazy stories because of your LDS stardom?
When I move into a new ward, there’s always the looking over the shoulder, and maybe someone coming up and saying, “Why are you here?” Almost scared and nervous. I don’t know if they think I’m working on a project or what; they’re just confused.

What has been the hardest thing you’ve had to deal with as an LDS actor?
A lot of people think it’s “what do the secular industry people think of you?” But they’re totally cool, and they love that I’m Mormon. The harder thing is when people who don’t necessarily know me look at the work I do and think that is me, but that’s an assumption and it’s not true. I’m going to choose characters that are flawed and not me, and it can be hard for people to see through that to who I really am.

Which of your projects has been your favorite?
I don’t know if there’s a favorite. I love my job—period. It’s the greatest job in the world. Something that has impacted me for sure was Saints and Soldiers. Understanding and appreciating more the men and women that serve us in the military.

How did your life change after Single’s Ward?
I quit my regular job training agents on securities and mutual funds, and thought, ‘Hey, I can do this thing as an actor.’ So, because of Single’s Ward, I quit everything and jumped in with both feet.

Many of your most beloved characters have a distinct goofy factor to them. What draws you to those roles?
I love putting myself in awkward situations. They’re so fun. My 9-year-old son watched The RM really for the first time a few weeks ago, and he had to watch through his fingers—you know, his hands were over his eyes—because he understands that it’s a character, but it’s so similar to me. He kept saying, “Oh, no, Dad! Why did you do that? Oh no! Oh you’re going to fall! Oh that’s so embarrassing!” He’s not embarrassed for me, but for the character that he’s watching. I just love that. There’s something that’s so fun about painting yourself into a corner and trying to get your way out.

I once read that comedian Christopher Guest says people expect for him to always be funny, and how that frustrates him. Do you ever feel that expectation to perform?
All the time, yeah. And so, people then, when I’m being serious don’t take me seriously. I speak at firesides and stuff, and people sometimes find it’s kind of disappointing if I just do a spiritual thing, because they do have that expectation of me being so funny. I just blow it off and go along with it and try to make them laugh.

Afterwards they might come up to me and say, “Oh, that wasn’t really that funny.” And then I do something funny.

I’ve met Christopher Guest, too, and he’s the most quiet, semi-angry man in the world. It was like pulling teeth to even get him to say hi. We were in this hallway thing for a pilot thing, he was so the antithesis of funny.

If one of your children came to you and said they wanted to be an actor, what would you tell them?
I’d want them to do it in school—in their plays and in the community. I’m not going to let my kids actually do a major part in a film until they’re 18. It’s not the environment that’s scary—like they’re going to be exposed to drugs and alcohol and things they shouldn’t be exposed to—it’s just the attitude and the family view gets skewed, in that, in order for that to be successful for a kid, the whole family has to change their dynamic, and that kid is the most important member of the family, as opposed to being a family unit. Even siblings say, “Oh, it’s my brother that’s important.” So it’s not the environment, it’s the skewed reality. But I’ve had my kids come on set for a few hours and they’ve been in the background and stuff—that’s totally fine.

-If they came to you when they’re 18, would you have any advice for them?
I’d sit down with them and talk to them about character and believability and about being connected through the Spirit to find a character—and that as long as you have that, you can stay grounded.

People ask, “how do you maintain standards in this horrible industry of sin?” It’s because I’m grounded and I have a family and I have people that I know support me. So make sure that they’re grounded first before they go off and get a skewed sense of reality.

Most people know you as an actor, but you also make music.  How does each skill allow you to express yourself differently?
Music for me is a very introspective and more personal thing. When you’re playing a character, it still is a version of you, but it’s not the whole you. When I’m playing music or writing a song, it’s very personal.

If you were told you couldn’t act or sing one more day of your life, what would you do?
I would love to be a teacher. For the longest time I’ve thought, maybe I would, I’d love to be a seminary teacher. I know that’s so appropriate for an LDS magazine, but it’s true. Hopefully, by the time I make that decision, we’ll be so rich, the Church won’t have to pay me!

I love teaching, and I love seminary. Some of the greatest things I’ve learned about the gospel were insights from seminary teachers.

The Huntsman Cancer Foundation is an important charity for you. Why did you decide to partner with them?
I’ve always thought, I want to make a difference, and I’ll do that as soon as I’m making millions of dollars and I’ll give big chunks to lots of different things. Then, I thought, I can do just a little bit, and that’s better than doing nothing. So with my latest album, I have a dollar for each CD goes to the HCF. And the reason I picked that is because Jon Huntsman Sr. is so amazing (and Jon Jr.; why not?) that there is no overhead—he pays for it all. So if you donate a dollar, the whole dollar goes toward the foundation, towards making a difference. My mother passed away from cancer, and I know a number of people that have battled with it, and I want to make is so that we can help people.

If you could do one thing different in your career, what would it be?
I don’t regret anything in the career choices I’ve made. I wouldn’t do anything different. What’s good, I feel, is that every film and every aspect of my career—instead of thinking, “is this it? Is this the best I can do?”—it’s enjoying every moment and thinking, “I can’t believe I’m so fortunate to be able to be doing this.”

What’s your secret for such boyishly blond hair?
[Laughs.] Genetics and summertime. Actually, as a kid, I was a towhead, and my mom—I don’t know why she would do this, we were just such white-headed kids—but even in the summertime, she would squirt lemon juice in our hair to keep it blonde. So we would go out and it would bleach it even more. So genetics, my mom, summertime, and a bit of lemon.