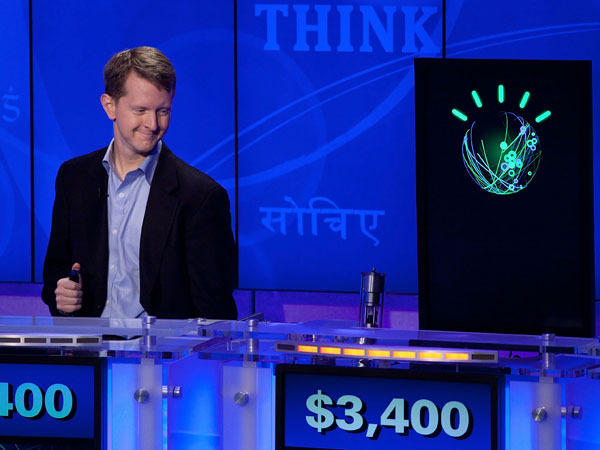 When I was selected as one of the two human players to be pitted against IBM's "Watson" supercomputer in a special man-vs.-machine Jeopardy! exhibition match, I felt honored, even heroic. I envisioned myself as the Great Carbon-Based Hope against a new generation of thinking machines—which, if Hollywood is to believed, will inevitably run amok, build unstoppable robot shells, and destroy us all. But at IBM's Thomas J. Watson Research Lab, an Eero Saarinen-designed fortress in the snowy wilds of New York's Westchester County, where the shows taped last month, I wasn't the hero at all. I was the villain.

This was to be an away game for humanity, I realized as I walked onto the slightly-smaller-than-regulation Jeopardy! set that had been mocked up in the building's main auditorium. In the middle of the floor was a huge image of Watson's on-camera avatar, a glowing blue ball crisscrossed by "threads" of thought—42 threads, to be precise, an in-joke for Douglas Adams fans. The stands were full of hopeful IBM programmers and executives, whispering excitedly and pumping their fists every time their digital darling nailed a question. A Watson loss would be invigorating for Luddites and computer-phobes everywhere, but bad news for IBM shareholders.
Read the rest of this story at slate.com