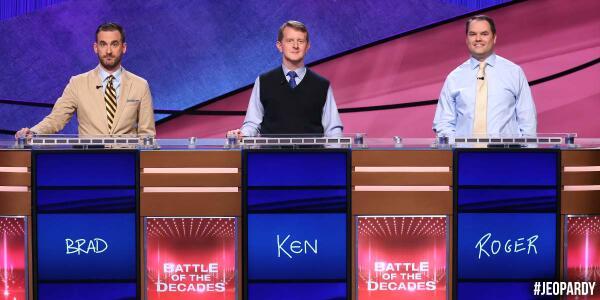 Ken Jennings Returns to Jeopardy! for 'Battle of the Decades' $1 Million Finale

LDS trivia champ and Jeopardy! sensation Ken Jennings will be appearing tonight (5/15) on Jeopardy! as part of the show's #BattleoftheDecades 30th anniversary promotion.

The promotion started in February with brackets for Jeopardy! champions from the 80s, 90s, and 2000s. Jennings beat out 27 other hand-selected contestants from the past 30 seasons of the show to claim his spot in the three-man two-day finale airing Thursday and Friday night.

Also competing are Jeopardy! stars Roger Craig and Brad Rutter. The winner will receive a $1 million grand prize in addition to their winnings. (To date, Jenning's winnings total $3,322,700.)

Jennings grew up loving the show--he spent many of his early years in Seoul, Korea on an Army base where only two television channels were in English. He said, "Watching people succeed at something just for knowing stuff was hugely inspiring to me." In later years, after the hayday of his Jeopardy! fame, Jennings has said, "My weird 15 minutes of fame on the show ('74 straight wins back in 2004,' he says modestly) is now a decade in the rearview mirror, but people still come up to me to talk Jeopardy! almost every day."

We're certainly excited to watch him compete, and wish him the very best!

Find out when you can watch Jen compete on the Jeopardy! finale.

Backstage, the contestants work with Jeopardy! staff and get ready to take the stage for Battle of the Decades.