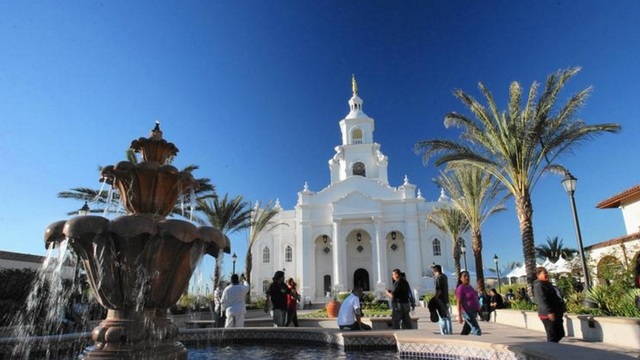 MR says: "Every inch of the 151-foot-tall Tijuana temple exudes craftsmanship," Tatiana Sanchez from the LA Times writes. Later on, in discussing the exponential growth of the Church, she adds, "Catholicism and mainline Protestant denominations have seen declines in membership in recent years. Mormonism has seen uninterrupted growth since its founding in New York in 1830." Read more below.

The grand structure, white walls and soaring pillars reminiscent of Spanish Colonial times tower over Tijuana, a stark contrast to the gritty surroundings, where merchants sell fruit from worn carts and schoolkids play.

Emblazoned in gold at its entrance are the words "Holiness to the Lord; the house of God."

Spurred by growth in Baja California, the Church of Jesus Christ of Latter-day Saints is opening its first temple in Tijuana next month. At the foot of the city's Cerro Colorado, it becomes the 13th Mormon temple in Mexico, a country whose ties to the faith date back centuries.